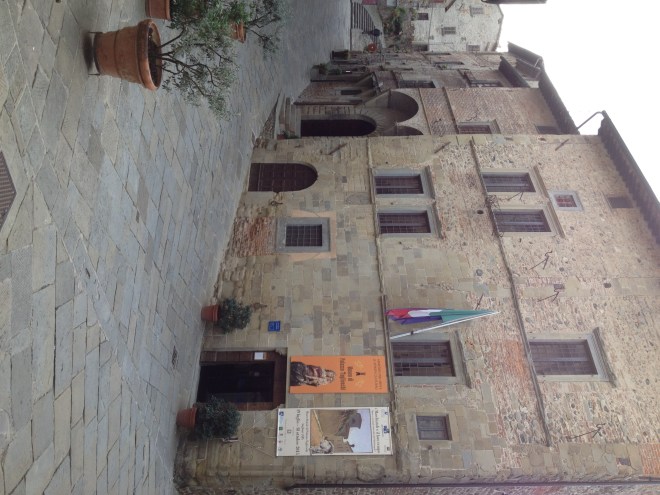 Our apartment was once the servants quarters for the palace next door and is most certainly the closet I will ever get to living in a palace.  The palace is the Palazzo Taglieschi and is now a museum.  After living here for six weeks, we finally went to the  museum to see how our neighbors, the royalty, lived.  They lived pretty well, it seems.

Our apartment is three levels and is shaped like a triangle.  It’s one window wide on one end and two on the other.  From the front, the building is three levels.  From the back, it’s four.  The street slopes down in the back and that was where the stables would have been back in the palazzo days.  Now it’s where our neighborhood restaurant is.  There’s a small apartment next to us on the very end of the building and the rest of the building is the palazzo.

This is the layout of the palazzo and our apartment is the little white sliver on the top left.

The museum is very interesting, especially for us, since we know what’s on the other side of the wall.  The first floor of our apartment is the living room and it’s right next to the kitchen and laundry of the palazzo.  That makes sense.  You wouldn’t have your servants living next to the ballroom or something.  This way it was easy for them to take care of the business of the palazzo and discreetly slip back over into their quarters.  Our landlord/friend Giovanni showed us where the door used to be connecting the two areas.  Now there’s radiator there.

There was a fantastic exhibit of Italian impressionist paintings when we visited the museum.  I don’t know much about art, but I’ve never heard about the Italian impressionists.  I’ve heard of the French and American impressionists, but this was a new experience for me.  It was a fantastic exhibit and I loved them all.  Most of the paintings were very small and so evocative.  Maybe it was because they were in the palace that I live next to, but they really spoke to me.  The exhibit is called “Macchiaioli e il loro tempo”, which means Macchiaioli and their time.  Macchiaioli are the artists who started the Italian impressionist movement.  In the late 1850’s a group of artists met regularly in the Caffe Micheangelo in Florence and revolted against the traditional teachings of Italian art academies of the time.  They believed “macchie”, patches or spots we would refer to as shadows, were the chief components of art.  They also believed in painting outside to capture the light and shadow as it happened.  There are many differences between the Italian and French impressionists and my oversimplified description would make many an art historian shiver.  But if the purpose of art is to move and inspire, then these artists were successful.  I loved them and and I love that, at least for a little while, they live next door to me.

They look like a fun bunch and it’s no wonder they produced such beautiful paintings.  The world is a funny place.  Here I am, a country girl from Georgia living next to this palace in Italy that’s about 600 years old with an exhibit of fine art that’s about 160 years old.  What treasures the world allows us to glimpse in very unforeseen ways.  All you have to do is open your eyes.

2 thoughts on “We See our Palace”