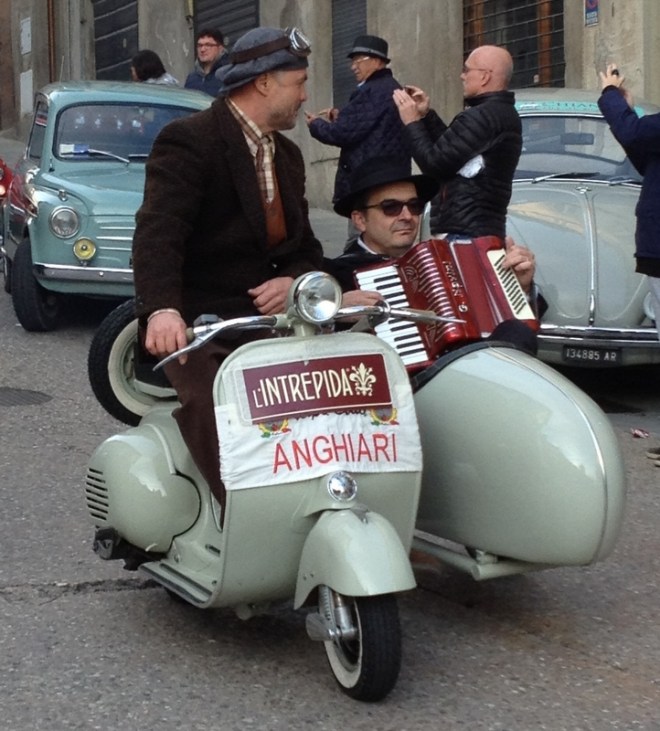 We thought the summer was the prime season for festas, but they keep coming.  In fact, there are so many coming up that we have to keep a notepad handy to write them all down when we come across them.  We can’t miss one.  I can’t possibly write about all of them – that could be a book all by itself – but I will try to mention them in my posts as we move forward.

There is a big bike race in Anghiari in October called L’Intrepida.  Let’s be clear, this is not a festa.  Nothing was blessed, there was no harvest, but there was plenty of food and music to go along with the race.  I’m not sure how much of a race it is, but several hundred bikers gather in the piazza and wait for their start time and bike all over the Tiber Valley.  We had a friend who participated and he rode with a group of his friends and they took it slow and easy – but finished the long route with no problem.  Of course, he’s 28 years old!

L’Intrepida is a race to commemorate the old bicycles that used to be prevalent here.  We think it’s just a great excuse for a gathering.  People dress in vintage clothing, some have antique bikes, and they all mingle in with the modern day bikers with their colorful spandex.  It’s also a homage to all things with wheels.  There are vintage cars and vintage motorscooters – basically, if it rolls, you can bring it to the L’Intrepida.

Caprese Michelangelo, a village about 10 miles away from us, has an annual Festa del Marrone, or brown chestnut festival.  They are known for the chestnuts that grow in that area and, of course, celebrate the harvest each fall with a festival.  We couldn’t miss that.  Caprese Michelangelo has another claim to fame – it’s the birthplace of the artist Michelangelo.  Caprese is up the mountain from us and the views are wonderful up there and it’s always worth the drive up the winding road.  They had chestnuts of all description – raw, roasted, sweetened, chestnut flour, chestnut cake – you name it.

And then there’s San Martino.  San Martino was a Roman soldier known for his compassion and generosity.  Once he met a beggar on a cold, snowy day and cut his own cloak in half so that the beggar wouldn’t freeze to death.  That night, he dreamt that Jesus appeared to him wearing the half cloak he gave to the beggar and thanked him for his generosity.  Supposedly, at the exact moment he gave the beggar his cloak, the sun came out and warmed everything up.  In Italian, this is called “estate di San Martino”, or summer of San Martino.  In the US, we know it as Indian summer.  Regardless, the weather here has been very warm over the past week or so and we have commented on how it’s like summer.  The feast of San Martino is November 11 and the festas start the weekend before and keep going until the weekend after.  It’s turned into a time to celebrate the new wine and new olive oil of the season, because what’s a festa without some food and drink?  It’s also apparently a time for tween-age boys to shoot off firecrackers all over town and scare little American dogs to pieces.

In Anghiari, the celebration was the weekend before the 11th.   The San Martino festa here was all about bringoli.  Bringoli is a type of pasta made with flour and water and is long like spaghetti but thick.  It’s also, like most Italian foods, unique to this area.  So we celebrated bringoli and new wine and olive oil.  Booths were set up all over town with all sorts of food products to taste and buy.  And the big tent set up for the serving of the bringoli.  The menu was bringoli with ragu or mushroom sauce, and brustichino, which is kind of like a sausage sandwich served on bread properly drenched with new olive oil.  There was also roasted chestnuts and two kinds of “new” wine.  And you could buy the bringoli “crudo”, uncooked to take home and have more, just in case you didn’t get enough at the festa.  We did that.

The Bringoli festa in Anghiari went on all weekend, but we were invited to another San Martino festa on Sunday in another town.  We have American friends who bought a house in a little village near Rome and we’ve been trying to get over to visit them.  They invited us to lunch at their San Martino festa on Sunday.  We drove over on Sunday and had a delightful lunch with them and their friends from the village of Blera.  This was a little different in that people served lunches in their own cantinas and you paid a price and stayed there for the afternoon.  They made reservations at one of their neighbors’ cantinas.  It was 20 euro for an antipasto plate of salami, cheese and bruschetta, lasagna, pasta with ragu, veal scaloppine with beans, and dessert.  And all the wine you could drink.  It was a great day – seeing friends, making new friends, participating in another festa and seeing a new town.  Millie the dog even made a new friend with their dog, Luna.

Festas are great.  They’re fun, they have good food, they showcase local products, and they’re a chance to get out and meet people.  Italians love to live communally.  It is important to them to share food and celebrate together.  We think it’s because they have had such a long history of banding together to ward off enemies and celebrate victories.  It has made them proud of their area, of their strengths, and like to show them off.  There’s always something going on somewhere nearby.  And we’re always welcome no matter where it is.  There’s always room at the table for one more and always reason to celebrate.