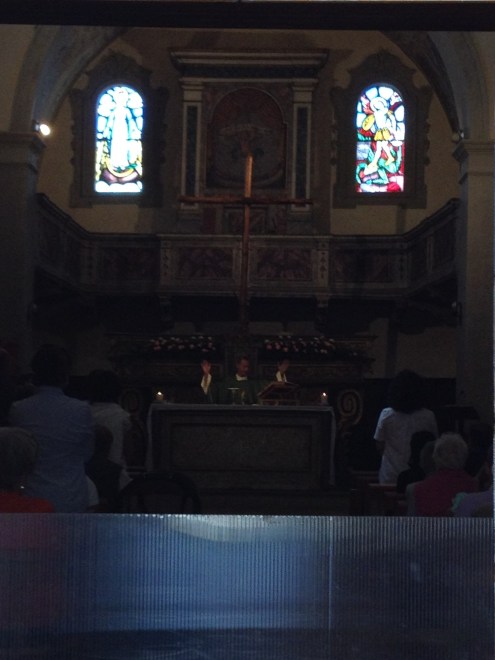 The parish church is just up the street from us, and my Catholic, former altar boy husband, really wants to go to church. This Sunday we went to church. It took us a while to figure out what time the service started. It doesn’t seem to be posted anywhere, but one Sunday we heard the bells ringing with an unusual gusto and we thought that must be the start of church. It was 9:15. So this past Sunday at 9:15 we headed to church as the bells were calling all the faithful.

I was raised Protestant and didn’t know what a Catholic was until I was in college. Even then I wasn’t so sure. Then I met and fell in love with a northwest Georgia, half-Italian, whole Catholic. He taught me a lot about this exotic religion and I came to appreciate the ritual and peacefulness of it. There’s something very comforting about knowing that you can go into any Catholic church in the world and the same scriptures will be read in every one of them on any given Sunday. It’s like you can go anywhere and that part of your life will be consistent. Except for the homily and the music, it’s predictable. I’m not sure I can ever get past the pope thing, but this pope is doing a lot to change my thinking on that.

So there we were in our little parish church in Anghiari and we recognized several people that we’ve met or seen around town. The “altar boy” was the waiter at the pizzeria, the woman next to us runs a shop across the street from our apartment. Many familiar faces. The service was the same as we were used to, but, of course, all in Italian, so we couldn’t really follow along.  And it seemed that kneeling was optional.  That may have to do with the fact that the average age was about 65 and the kneelers weren’t the nice padded kind like we have at home – they were hard and wooden, built for serious praying.

As I was sitting there taking all this in, I thought about the role religion has played in the world. There was a statue of the Virgin Mary next to the altar looking protectively and lovingly over the congregation.  I looked around at all the humble people in the sanctuary who were there because they possess faith. Then I thought of all the evil that has been done in the name of religion and even the origins of the Catholic Church. I couldn’t help but think of the scene from one of the Godfather movies, maybe the first one, where Michael is in church becoming godfather to his sister’s son while all the revenge and killing that he ordered is taking place. While he is renouncing satan at the altar of God he is exacting evil. Fiction and Hollywood, I know, but something about it still rings true. Too many people go to church because they should, not because they want to.  They go to wear the badge of piety on their sleeve, not because they feel the need to help those in need, to leave the world better than they found it.

When our granddaughter was christened, the priest said something that sticks in my mind.  He was talking to her parents and he said instead of thinking on Sunday morning, we have to go to church, you should think, we get to go to church.  I thought about that for a long time after and I think that is so true.  Too many people go to church because they have to or they think they should, not because they are allowed to or want to affirm their faith and their place in the world.  Thinking of worshiping as a gift and not as a responsibility makes a lot of difference.  When you think of it that way, you can do it in a lot of places.  In fact, when you think of it that way, you can worship anywhere.  We’ve seen such beautiful scenery here that it’s hard to believe there’s no higher power.  So, looking at that scenery is a form of worship,  But being in these amazing churches is also very awe inspiring.  I remember once years ago when we were in Italy, we went through some small town and stopped to go into their church.  It was gorgeous.  It was built to commemorate the town surviving the plague.  What a wonderful reason to build a church.

I know many people who don’t go to church with any regularity who possess more faith than some of those who attend every Sunday. Their faith is demonstrated in their actions and their treatment of others, not in their perfect attendance pin. As I looked around the congregation on that Sunday in Anghiari, I hoped that these people came there as a celebration for the life that they had been given and to gain a renewed inspiration to live by the basic tenets of good that we all know, but so often don’t follow. Be nice to people, help those less fortunate, be thankful for what you have, don’t envy others, and believe that somehow it will all work out. How wonderful the world would be if we all could just remember these very simple, but oh so complex, things.

6 thoughts on “We Go to Church”