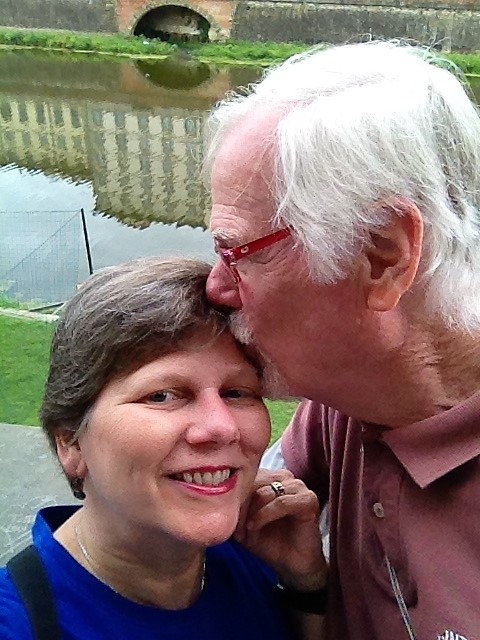 I certainly hope there’s not a limit on how much happiness and beauty two people can experience.  If there is, then I’m afraid we’ve probably maxed out.  But who would limit happiness?  Who would ration perfect days?  I want to save all these perfect experiences and keep them in a beautiful locked box in my soul and take them out when I need to remember how wonderful life can be.  Because bad things happen and when they do, I want to remember the bliss that comes from doing what you love with who you love.

Today we went to Florence.  Just took the train from Arezzo and walked around one of the most beautiful cities in the world.  We didn’t go to a museum or into a church.  In fact, the only buildings we went into were a restaurant, a gelateria, and a shop where I bought Serafina her 6th birthday present.  We did take a brief stroll through the Palazzo Vecchio – just in the free part.  Otherwise, we just walked around, sat in a piazza, gazed at the Arno, and did some quality people watching.  The weather was perfect – a little overcast and about 72 degrees – perfect for strolling.  While Steve and I had a great time, poor little Millie wasn’t so keen on Florence.  Too crowded, too many horses (scary!), too many bikes (she’s scared of them) and no grass.  But she soldiered on was rewarded with many crusts of bread at lunch.

For lunch we went to an old standby, Ristorante Fagioli.  It was a 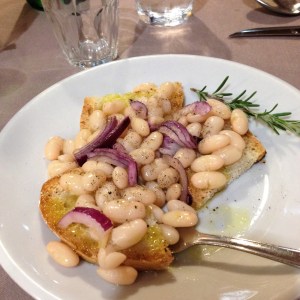 Then I had polpettini, fried meatballs.  I know – fried meatballs? But they were so good.  Steve had a pork roast that was wonderful.  And because we hadn’t had enough white beans from the fettunta, we had a side of white beans to share.  And ate every one.  We also

ordered a fiasco of sangiovese wine.  That’s the grape that’s used in Chianti.  A fiasco is the straw covered bottle you see in old movies and cheap wine stores.  It’s called a fiasco because the bottles were made round on the bottom so they wouldn’t sit up right, so they created the straw covering to straighten the whole thing.  A fiasco.  Fiascos are pretty big and this one was no different.  We drank what we could – we did a pretty good job.  When it came time to pay, the waiter looked at how much we had drunk and charged us accordingly.  Love it.

Then we went for gelato at one of the best places in Florence. 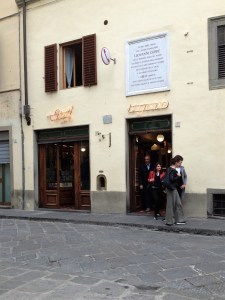 So say many people who rate such things.  Vivoli.  The gelato is great, but they don’t serve it in cones.  Only cups.  I don’t like the cups because about a quarter of your gelato melts in the bottom of the cup.  If you have a cone, you get every last drop.  Plus you get the fiber from the cone.  It’s a win-win.  But regardless of the mechanism by which they present it to you, it’s pretty darn good gelato.

On our stroll we passed a huge wedding party.  They were filing 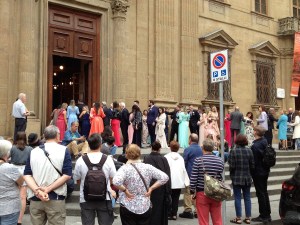 into a gorgeous church between the Palazzo Vecchio and Santa Croce. Didn’t get to see the bride, but the rest of the party was really decked out.

We walked over to the Arno and looked out over it for a bit.  We looked at the Ponte Vecchio, but didn’t want to get in that 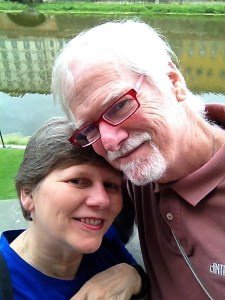 tourist throng.  We just got a perch by the river and looked out over this body of water that has had such an influence on this city.  So many of the materials used to build this city were transported down the Arno.  The beams used to build the duomo were floated down from the Casentino area (that we visited just a few days ago).  The river has flooded several times, but most dramatic in 1966 when it crested throughout the city and destroyed hundreds of pieces of art and other historic treasures.  Finally, through modern engineering, they figured out how to tame this river and protect Florence from its angrier moments.

I think if I were going to design my own palace, I would use the Palazzo Vecchio as my inspiration.  It’s big and imposing, but not too big.  It’s right in the  middle of the action, but has private courtyards and spaces for getting away from the madding crowd.  And it’s just so dang pretty inside.  We didn’t take the tour, and I must admit I’ve never taken a tour of it, but what I can see by just meandering through the public (free) part, I’m sold.

Plus your front yard is the magical Piazza Signoria – one of the greatest piazzas in Italy.  Fine palace living, I would say.

Another one of my favorite piazzas is Santa Croce.  With the gothic Santa Croce cathedral framing one end, it’s a huge 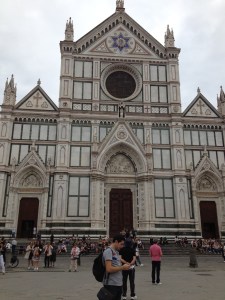 expanse of openness with gorgeous buildings surrounding it.  It’s very quiet and a great place to people watch.  Grab a seat on a bench settle in for an entertaining show.  I doubt there are any locals who walk through here, except on their way somewhere, but you can see every nationality in the world

represented here.  It’s a mini-United Nations.  I say it’s quiet and it is from the standpoint of traffic noise.  No horse drawn carriages, no motor bikes, only a few cars.  And humans making the noise they make.

As we were making our way to the train station to journey home, we passed a kid’s store and I stepped in the see if they had a suitable gift for Serafina’s 6th birthday, which we missed because we were here.  She told me she wanted a soft, cuddly unicorn.  Well, this place had the most adorable fluffy slippers with a unicorn head coming out of the toes and wings on each side of the feet.  And a soft, fluffy bathrobe with a hood, with the unicorn coming out of the head.  I think it fit the bill for soft, cuddly unicorn paraphernalia.

Tired, dirty and thirsty, we got to the train station and bought our ticket in one of the self-service machines.  We were thrilled to see a train to Arezzo leaving in just 10 minutes.  We snagged the tickets, found the track and jumped on the train.  Then we realized that it was the local, slow train that stopped in every town – not the fast train we took over.  Took us about an hour and half to get back (as opposed to 45 minutes to get there).  Well, we didn’t have anywhere we needed to be and the train was nearly empty so the three of us spread out and enjoyed the scenery and dozed on and off.  It was actually pleasant, even though at the end of a day like that, you’re really ready to be home.  When we got home, we all had showers (even Millie) and got comfy-cozy in our little apartment, content with another wonderful day tucked into that beautiful locked box we are keeping in our souls.

2 thoughts on “How Many Perfect Days are We Allowed?”