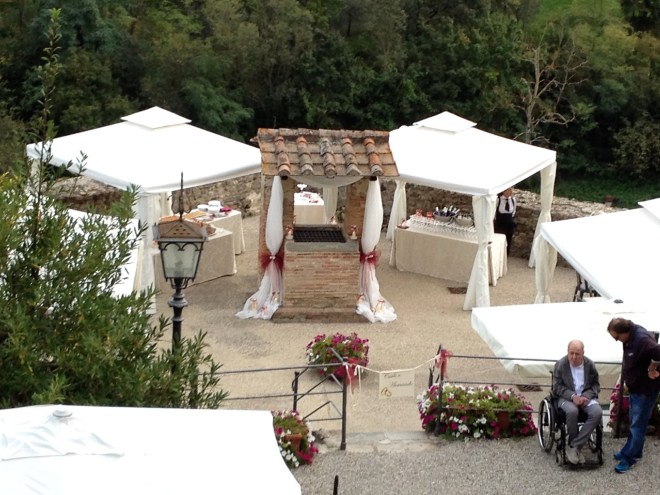 Italy has many, many dirt roads that are called strade bianche, or 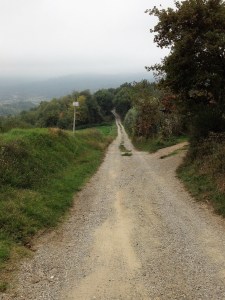 white roads.  The earth here is so full of minerals and volcanic rocks that the dirt roads are white.  Not like our red dirt roads in Georgia.  If you walk out of the city in any direction, you will come across the white roads.  They make a lovely contrast to the symphony of greens that dominate this landscape.  As you look down them, they take 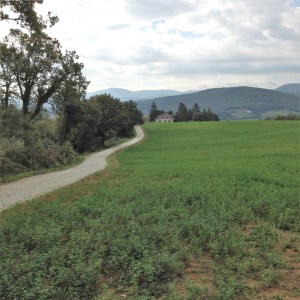 a meandering course and then disappear around a bend or over a crest or behind some trees, giving an air of mystery about what’s down that white road.  I love looking at them and wondering where they go.  In my imagination they lead to some fabulous villa or farm house and I love that they don’t reveal themselves.

This morning as we walking and gazing down the white roads, a car came up to us and pulled over.  We recognized our friend Giovanni.  He got out and as we were greeting each other, his wife, Paola, came walking from the other direction.  We chatted for a bit and then he told us that the plans that we’d made with him for Monday would have to be changed.  He had asked us to go to Panzano with him where his cousin has a winery, but he found out that his cousin would not be there on Monday.  Any other day of the week would work.  We told him that Tim and Julie were coming to visit on Tuesday and that we all had plans on Thursday, so it would have to be Wednesday or Friday, and would it be OK if Tim and Julie came with us?  Of course it was fine – the more the merrier – and Friday was agreed upon as the best day.  So out of the few days that Tim and Julie are here, we’ve obligated two of them.  Hope they didn’t have a lot they wanted to do or see!  Once we settled that, Giovanni got back in his car and Paola resumed her walk in one direction and we resumed ours in another.  How did we all meet perfectly in that spot in the road to decide this pressing issue?

As we always do on our walks in the morning, we talked about our food consumption plan for the day.  Since it was Sunday, we decided to do the big Italian Sunday lunch.  This is huge for Italians.  They either go out or go to someone’s house, usually a grandmother, and feast for hours.  Since we don’t have grandmother here, we went to a restaurant.  We went to Sansepolcro and tried to decide between two restaurants – Da Ventura and Fiorentina.  We tried Da Ventura first, but they were full.  So that made our decision easy.  We went to Fiorentina and got the last table that wasn’t reserved.  I told you Sunday lunch is a big deal here.

Most of the tables were filled with big families, all dressed up from church.  Several generations all coming together for this weekly ritual.  We settled into our corner table and made up stories about all the big groups there.  Myra, we could have used your skills for this exercise!  We had a wonderful three hour lunch.  We had fried porcinis to start. 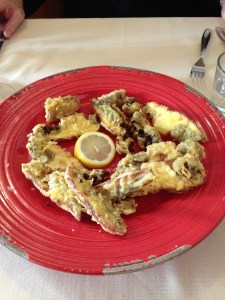 Maybe we’ve finally gotten smart about eating.  We ordered a second plate to share.  I know I’ve said this before, but Italians eat from every section of the menu.  If our accents, clothes, and just general demeanor do not flag us as Americans right off the bat, the fact that we pick and chose what we want from the menu seals it.  I’ve tried mightily and I just don’t see how you can eat a dish from the antipasta section, the primi section, the secondi section, and the contorni section.  And still have dessert.  But, God bless ’em, they do it.  We shared a tagliata, which is sliced grilled beef.  This one came with five different flavored oils that you could try.  If I get beef, I usually try to get a tagliata because the chances of it being cooked medium are better.  A steak is never going to be cooked to my satisfacation – another sure indicator of my nationality.  We had red pepper oil, green pepper oil, fennel oil, mustard oil, and rosemary oil.  We both tried every one and liked them all, although the fennel and rosemary were my favorites.

We barely finished lunch in time to get back and get ready for Carlo’s wedding.  We really didn’t know what to expect here.  Like so many things we enter into in this country, we just weren’t sure what it would be like.  It was at the city hall at the very top of the ancient part of the village, just a short stroll from our apartment.  We got to the piazza and there was quite a crowd there already.  Fortunately, we saw some people we knew, and even more fortunately one of them spoke English.  Apparently, everyone gathers outside until the couple arrive.  The crowd grew until the piazza was almost full.

Then a car came driving up all decorated with white ribbons and blowing its horn with gusto.  The crowd parted and it pulled into the middle of the piazza and out came Carlo and Armando.  And Carlo’s 18 year old dog who had on a bow tie for the occasion.  They greeted the crowd personally.  They went up to almost every person in that piazza until finally someone with a very impressive red, white and green sash called everyone to come inside.  There was a table and chairs set up at the end of this ancient hall – kind of like a trial was being held.  The crowd all gathered to the sides.  Then Carlo, Armando and the bow-tied dog came in to cheers and applause.  The couple took seats across the table from the sashed man and what I suppose were two witnesses where seated on either side.  There were some words said by the sashed man, some of them apparently funny, and many signing of papers by everyone seated at the table.  Then I suppose they were pronounced married because everyone cheered and they kissed.  Then there was some more signing and rings exchanged and by then the crowd had somewhat lost interest and there were lots of side conversations taking place.  Finally, everyone brought their attention back to Carlo and Armando and when they stood up and posed for a picture with the witnesses and the sashed man people started filing back out into the piazza.

We all got little cones of colored rice and when they emerged from the door they were pelted.  Someone even went upstairs to the window just over the door and dumped a bag of rice on them.  Then they took pictures with almost everyone there.  And spoke to everyone in attendance.  It was a very nice event and I’m so glad we were able to go.  We were just standing off to the side because of our limited language skills and decided we would just slip away.  We said goodbye to Livio, one of the only people there who spoke English and he said we should stay for a drink.  He gestured to a bar that’s in the same piazza as the city hall and said he was sure they would have a little something.  We tried to hang around, but they showed no signs of slowing down the hugging, kissing, picture taking and general standing around in the piazza.  We decided that staying would just be more of us standing off to the side since we really couldn’t talk to anyone and we felt a little awkward about that.  So we faded away, somewhat sad that our language skills are so pathetic that we can’t even have more than a very basic conversation.  It looked like it was going to a lovely party.

We got back to our apartment and talked about what a great experience that was.  Carlo has long been a wonderful person to us and we have several of his paintings in our house in Atlanta.  To see him get married was very special for us.  Another great day in Italy.

Marriage and white roads have a lot in common.  Sometimes bumpy, not always clear where they’re going, and full of unexpected twists and turns.  But they’re beautiful and beckon you to stay on them to see where they will lead.  Because you’ll never see the end and you never know what’s around the next bend or over the next hill.

3 thoughts on “White Roads and Weddings”