Took the train to Rome – it was only 20 minutes late!   Another great weather day – beautiful skies and not terribly hot.  For some reason, the train from Arezzo to Rome always comes in at a very far flung track so you have to walk forever to get to the station.  Then we had to pick up our Roma passes at the Tourist Information booth on the absolute other end of the station.  Then we had to catch a taxi at the front of the station.  We were pooped by the time we got into a taxi.  We got ripped off on the taxi drive but we were so ready to get out of the train station that we didn’t argue.

Our apartment is fantastic.  It’s exactly halfway between the two hotels we usually stay at on the Aventino Hill.  It’s an AirB&B and this is our first time using them.  I must admit I was a little worried, but I couldn’t have imagined a nicer place.  We choose the AirB&B route because it was cheaper than getting two rooms at the hotel.  Plus, we’re all together and have space to spread out.

It’s really funny how life works out – when we stay at the Hotel Aventino we always try to get the room with a balcony.  We look out over the building that this apartment is in and have watched kids grow up and families come and go.  We’ve always wondered what it was like inside.  Now we know.  This apartment is on the bottom floor and the family who owns it lives upstairs.  I assume they own the whole building.  It’s a two bedroom two bath with a large living/dining/kitchen area and a precious little patio off the living room.  And AC.  Really good AC.  Independent AC in every room.  Hunter’s room is colder than a meat locker in January.  It’s very modern and newly renovated.  Modern, but very comfortable and tasteful.  The bathrooms are incredible.  We love it and want to live here.

After we finished marveling at the apartment, we struck out for a little tour of the area.  We went to the top of the Aventino Hill and looked through the keyhole at the Knights of Malta headquarters.  The keyhole looks through a beautiful pergola with St. Peter’s perfectly framed in the center.  It’s an amazing thing because it seems as if you’re looking through a telescope but you’re not.  It’s just mesmerizing.  Very hard to take a picture so you’ll just have to take my word for it.  Then we toured the church, the Basilica di Santa Sabina all’Aventino.  It’s a 5th century pagan/Christian church and the doors date back to about 420 and are made of cypress.  They are quite impressive – so impressive I forgot to take a picture.  From there we went next door to the orange garden and one of the best views of Rome, in my opinion.  That’s the shot at the beginning of this post.  After that we walked down the hill to look at the Mouth of  Truth.  When we first started coming here, you could up to it any time day or night for free.  Now it’s only open certain times and you have to pay.  We looked through the fence at it and decided not to pay and wait in line.

Across from there are two ancient temples.  The temple of Hercules is from the 2nd century BC.  Truly amazing. 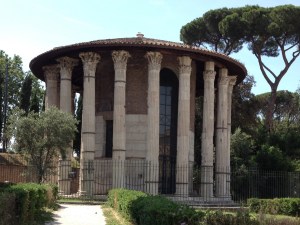 We walked along the Tiber River for a little way 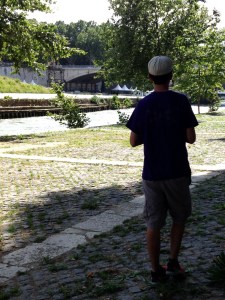 on our way to Trastevere.  Tresteverse means across the Tevere (Tiber).  It’s a great neighborhood and not as touristy as the Rome side of the river.  We wound back through the Jewish ghetto on the way back to the apartment.  On the edge of ghetto is the Teatro Marcello.  It was built in the 13th century and was an open air theater.  The area around it is covered in ancient Roman rubble – capitals from columns, inscriptions from buildings, various architectural parts and pieces.

After all that, we were tired, hot and dirty.  We had a very relaxing time in the COOL apartment and got ready for dinner.  We ate at one of our favorite restaurants, Taverna Cestia.  We sat outside and the weather was absolutely delightful.  It was nice and breezy and wonderful.  We had a great meal, the highlight for me and Steve was the fried artichokes.  Yum. 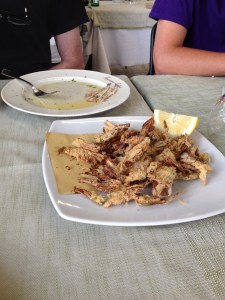 A great day and a great start to Rome.