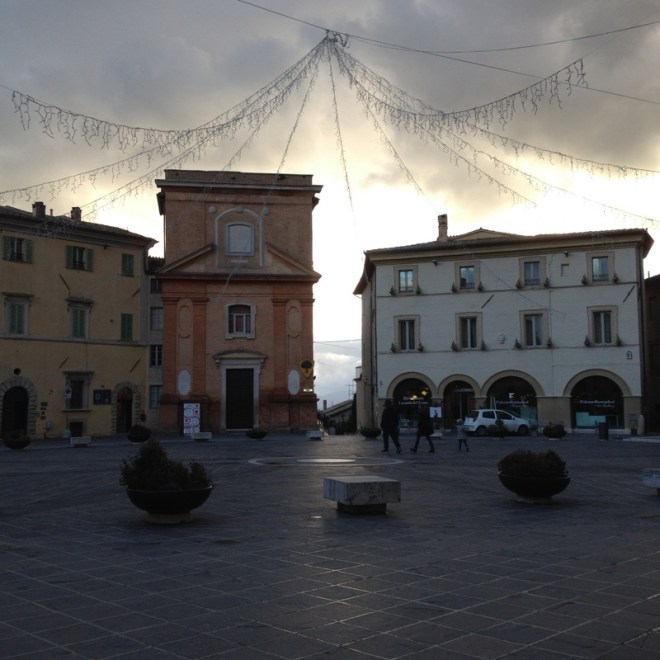 Since we’re counting down the days until we pack up and go home, we feel like we need to make every moment count.  This weekend was an example of how we plan to pack as much in as we can.

Our landlord and friend, Giovanni, has two sons who live in Anghiari.  They are both involved in the family business and we’ve known them for years.  The older of the two, Livio, and his wife Anna, were expecting their first baby when we arrived back in August.  It was due in late January and we were afraid we wouldn’t get to see her if she was even a little bit late.  Well, she came about a month early, which was not good, but she’s OK, which is good.  Anna is German and her parents came to see their first grandchild, and to celebrate the occasion, Giovanni and Paola had a big Italian lunch at their home on Saturday.  The baby was the star attraction, all of nine days old and weighing in at about four pounds.

Some things are universal and know no international boundaries.  A new baby in the family is one of them.  What a difference it makes to have a baby in the house.  Everyone’s focus is on the baby and all the women are lined up to get their turn holding her.  Then men mumble something about her being too small and stand back and gaze at her.  Idle chit chat is replaced by baby stories of the parents, aunts, and uncles, and baby care philosophy.  These new parents will get a lot of advice – Livio’s grandfather, who is 93 years old, was the town doctor for 45 years.  Anna’s parents, Rolf and Elke, are German and are great people, but have no qualms about giving their advice.  And Livio’s parents, Giovanni and Paola, have three sons and two other grandchildren, so they’re the old pros at this grandparent thing.  Lots of people whose primary concern in life right now is this little four pound bundle of sweetness.

After being there most of the afternoon, we left and went to Michelangelo’s and Rosella’s for a chili making lesson.  This time it was me giving the instructions.  I made chili once when Michelangelo was visiting us in Atlanta and he just loved it.  He’s been wanting me to make it so Rosella could see how it’s done, and we figured this was our chance.  All of you Americans know that’s really nothing to making chili.  It’s not a complicated dish.  But they’re all different, everyone with their own secret ingredient or special combination of spices.  After I had put it all together and let it simmer for a while, I went to taste it to adjust the seasoning.  It tasted like no chili I’ve ever made and I was trying to figure out what was wrong.  Then Anna, their daughter who speaks English, asked me how much cinnamon I used.  Cinnamon!  I thought I was putting red pepper!  No wonder it tasted a little odd.  I tried to compensate by adding more liquid and other spices, but you could still taste a mild sweetness.  You know, it wasn’t really bad.  In fact, it was pretty good.  Not what we expected, but we may have found our own secret ingredient.  For dessert, we had castagnole, a traditional Italian dessert served around lent.  They’re fried dough balls that are drizzled with honey and/or made with Alchermes, a red liquor used in a lot of desserts.  They’re kind of like doughnuts without the sugar glaze.  Quite tasty.

Needless to say, we went to bed that night very full.  The next day, we had lunch on the piazza and then drove to Montefalco for the afternoon.  Montefalco is in Umbria and is about an hour from here.  It’s the home of Sagrantino grapes that are made into Sagrantino wine – one of the best in Italy and certainly the best in Umbria.  The day was cloudy, but with patches of sun.  I love the way the sun breaks through the clouds and casts spotlights on the landscape.  It’s so hilly here that when this happens, some parts of the countryside look like they’re being showcased for your viewing pleasure.  If you watch long enough, the spotlight will move to another area.  The light here changes so often – I know why photographers and artists love it here.  The same view never looks the same.  There are subtle differences in color, sun, and shadow with every gaze.  So many times I’ve asked Steve to pull over because the light was so perfect and by the time I got my camera and got out of the car, it was different.

On the way to Montefalco, we stopped in Bevagna, little village nearby.  We strolled around and went into a church with some of the most beautiful carved wood doors I’ve seen.  I took many photos and when I got home I noticed that the carving depicted some battle.  I’m sure it was some metaphor for good conquering evil, but it was a little gruesome to find that what I thought was so lovely was a slaying.

The closer we got to Montefalco, the cloudier and windier it became.  It seemed like a storm would strike at any second.  We strolled around, tasted some great wine, bought some great wine, and took in some great views.  The clouds made the landscape very dramatic.

As we drove back to Anghiari, we noticed that even though dark clouds had moved in there, it was noticeably lighter later in the day.  Around the winter solstice, it got dark here around 5:00.  But yesterday, it was about 5:30 and extremely cloudy but there was still light coming from the western sky.  A sign that the short days of winter are lengthening and our time here is shrinking.  But now we have a little more daylight everyday to make the most of our remaining time.  And that’s what we shall do.

3 thoughts on “We Have a Special Weekend”