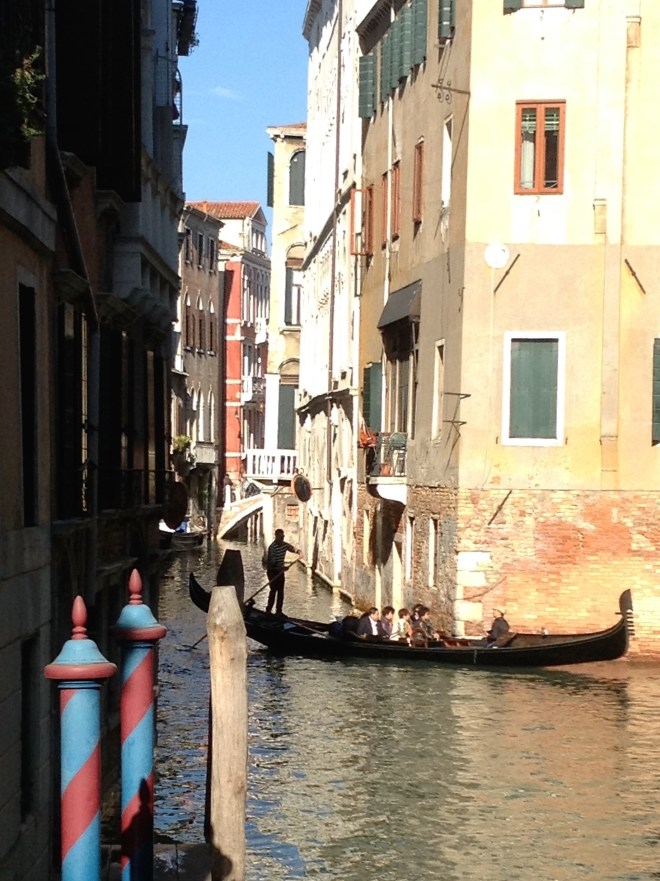 As part of Myra’s great Italian adventure, we took the train to Venice for a couple of days.  Venice is incredibly touristy, almost always crowded, outrageously expensive (but not as bad as Switzerland), and easy to get lost in.  But it’s Venice.  It’s like no other place on earth and you have to keep reminding yourself that it’s real and not some Hollywood set or hotel in Vegas.  We had no agenda, no list of things to see or do – we just wandered around, sat in San Marco piazza, took a water taxi ride through the canals and, of course, ate.

San Marco is one of the greatest piazzas in the world.  It’s huge and completely enclosed by arched gallerias full of shops and restaurants.  It’s anchored on one end by the basilica of San Marco and the Doge’s Palace.  The restaurants around the piazza are ridiculously expensive.  Some of them have small orchestras that play all afternoon and into the evening.  At night crowds travel from orchestra to orchestra and it becomes a little competition to see who gets the biggest round of applause.  The moon was full while we were there and it was a beautiful combination of music and nature.

One of highlights of any trip to Venice is a stroll through the Central Market.  This is a market to end all markets.  It’s open every day and it’s where most Venetians go to buy their meats, fish, and produce.  And tourists go to take pictures.  It’s massive and just keeps going on and on.  Rows of produce bordered by butcher shops and at the very end, the fish mongers.  Everything arrives by boat and it’s situated in a prime spot in central Venice – right next to the Rialto Bridge on the Grand Canal.

All that beautiful produce and fish went straight into our tummies.  Venice is a tricky food town.  It has some fantastic restaurants and some very touristy, mediocre restaurants.  They are all expensive so it pays to seek out the good ones – you pay as much for them as you do the mediocre ones.  We lucked out on food.  We had three meals there and two of them were amazing and third was darn good.  The darn good one we just happened upon out strolling.  The others were recommended by Slow Foods and our friend Michelangelo.

The Slow Foods place was Wildner.  If we hadn’t had this recommendation, we would have never eaten there.  It’s the restaurant at the Wildner hotel and is right on the Grand Canal at the San Marco water bus stop.  It had all the markings of a touristy, so-so place.  It was anything but.  It was fabulous.  We shared a shrimp appetizer with onions and polenta.  The polenta is white polenta, called biancoperla, and is unique to the Veneto region.  Very different from the yellow polenta that we’re used to.  Much lighter and a littler sweeter.  Maybe it’s made from the Italian version of Silver Queen corn.  Anyway, it’s so unique that when we told Michelangelo and Rosella about it, they had never heard of it.  Then we had cuttlefish with polenta and sea bass.  Some of us liked the cuttlefish more than others and the sea bass was perfection.  Cuttlefish, for those who do not know, is a type of squid.  Remember this if you ever see it on a menu.

For lunch the next day, we ate at La Madonna, near the Central Market and Rialto bridge.  It was recommended to us by Michelangelo.  It was wonderful.  Everything we had was great and we left there full and very happy.

Like I said, Venice is expensive.  Gondola rides are about $100, depending on where you go.  But one of the best places to see Venice is by water on the canals.  The Grand Canal, Venice’s main street runs north-south through the middle of Venice.  It is truly like a snake as it makes its way to the lagoon that pours into the Adriatic.  You can walk along it at some points, but then you have to take a detour around canal-front palazzos that have been turned into luxury hotels, museums, or still serve as homes for very wealthy, fortunate Venetians.  Then there are the smaller canals that run all over the city.  Imagine your neighborhood, except all the streets are water.  The smaller canals have smaller canals that branch off them.  And so on.  So we paid a water taxi driver to give us a 45 minute tour of the city.  We sat in the back and enjoyed the amazing views and the bright sunshine.

We had one last meal and no recommendation, so we struck out on our own and tried to find something.  We wandered down little alleys that could be used in a very scary movie and stumbled upon a cute restaurant that was sufficiently crowded and could take us in just a few minutes.  OK.  They gave us a glass of something colorful and bubbly to drink while we waited.  We liked that.  Then we got our table and were set.  So we waited for menus, water, bread – all the things that come immediately upon sitting down at an Italian restaurant.  And we waited.  And waited.  Servers kept coming back to check on tables and bring food, but skipped right over us.  We kept motioning to them and they nodded but never helped us.  Finally we called one over and said we really needed some service.  We finally figured out that the manager, or owner – we weren’t sure – took all the orders and the servers just brought the food out and cleaned the tables off.  Finally the manager came over and apologized for the delay and got us water, wine and bread.  And took our order.  The food was pretty good, despite the wait that came with it.  At the end of the meal, the manager gave us a half bottle of wine to try and make up for the wait.  It did make us feel a little better. 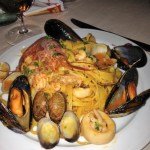 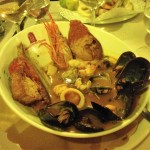 The day we left it was raining.  Not bad, but enough to make it pretty miserable.  Venice is beautiful in the rain, but hard to navigate in the rain.  We were fortunate that the weather was perfection while we were there and pitied the poor tourists who were just arriving in the rain.  But you have no choice but to power through and do it, despite the weather.  It’s Venice, after all, and part of the fun is wandering around the curving streets, crossing the gorgeous arched bridges, and getting lost only to emerge into a glorious piazza or wind up on the Grand Canal.

Venice is work.  You have to get on and off boats, walk a lot, drag your luggage across the cobblestones and over the bridges.  There’s no catching a cab outside your hotel and running over to another part of town for dinner.  You walk or you figure out a way to take the water bus or you pay a fortune taking a water taxi.  Restaurants are hit or miss and you pay the same price for the hits as you do the misses.  But San Marco piazza is like no place on earth.  The music, the couples dancing, the crowds applauding, the pigeons searching for crumbs – it’s really enchanting.  You don’t even mind paying $15 for a glass of wine just to take in the street scene.  Once.  You wouldn’t do it more than that, but once is enough.  Venice is even a little hard to get to – flung way over on the east of Italy, it’s really not on the beaten path.  You have to go out of your way to get there.  But it’s worth every minute.  You feel like you’re part of something very special when you’re there.  Like you’ve been granted access into a place that doesn’t really exist – a magical experience and one that you’ll never forget.

4 thoughts on “We Go to Venice”