We took our first trip today. Our wonderful landlord, Giovanni, let us rent a car from him while we’re here. It’s a 20ish year old BMW convertible with 100,000 miles on it. It’s fine for driving around, but we discovered that it has no AC! We wanted to drive over to the Chianti region and have lunch at a little restaurant we’ve been to before and loved near Greve. Map in hand, we set out with our little dog and a bottle of water. That’s when we found out there was no AC. Italians don’t really use the AC in their cars even if they have it. Every car you see has the windows down no matter how hot it is. So we decided if they could do it we could do it, too. Well, we did it, but it was just a little better than miserable. When we were on the highway, it was OK with the wind coming through the windows. But when we went through little towns, or heaven forbid, stopped and got back in, it was pretty hot. But the day was beautiful and we went for it. 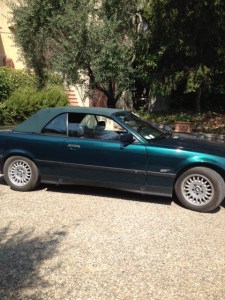 We decided to drive a little south to Siena and then go up to Greve. We took a number of unfortunate turns – turns that ultimately got us to where we were going, but was not the direct route we wanted. Road signs here are interesting. They point you in the direction of a town and don’t give you the road number or the distance to the town. We found out years ago that one town can have many different roads that lead to it. So just because you go in the direction of Siena doesn’t mean that you’re going on the road you wanted to go on. You’ll get there eventually, but it’s a great mystery exactly how.

We made it to a little place called Badia in Passignano and decided to eat there. It was about 1:30 and we were afraid if we drove on to Greve the restaurant we wanted to go to would be closed. That’s another thing you have to be careful of here. Most restaurants, in fact most businesses, close about 2:00 or so and reopen at 6:00 or so. So if you miss it, you miss lunch. We ate at a very nice little restaurant overlooking Chianti vineyards on a lovely terrace. A big party sat at the table next to us and they were Spanish. They spoke very little Italian and the waiter didn’t speak Spanish, so they used English as the bridge. That is so common here. Almost everyone knows a little English. It’s good in a way, but it’s too easy for us to speak English. We need to be forced to speak Italian. Even Italians who don’t speak English well like to practice so they speak to us in English. Anyway, the food was great – I had the ravioli stuffed with ricotta and zucchini and my husband had spaghetti with lemon, pancetta and tomatoes. 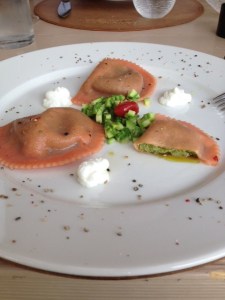 Badia in Passignano is a charming place. Badia is like an abbey . There’s nothing there but a beautiful church, a monastery, an incredible garden, and some of the best views on the planet. It’s very serene and tranquil, a place that you want to find a shady perch under a big tree and sit for a while contemplating why there can be such peace in one place and such turmoil in others. 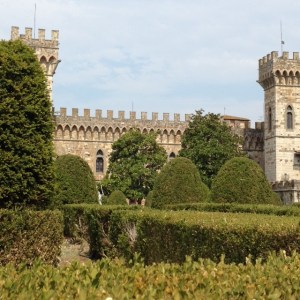 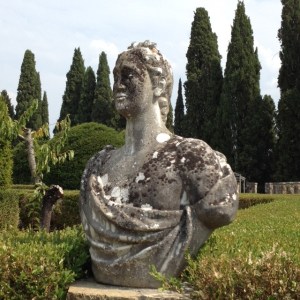 We drove on to Greve. We were actually headed for a little town just up the hill from Greve called Montefioralle. It’s not on the map, but it should be. It’s an absolutely lovely town with a fabulous restaurant, great wine and olive oil, a tremendous view and that’s about it. It’s one street that flows through town like a little river and every now and then you glance through an alleyway to the vista beyond. And wouldn’t you know it – the restaurant was open. We’ll come back another day, but to console ourselves we bought wine, olive oil, salami, and marmalade. 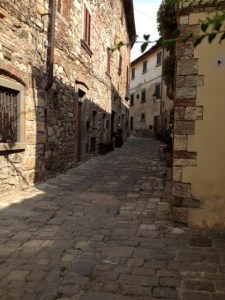 Now we’re back home cool from our showers and comfortable in our little apartment. Our dog has had her dinner and is cuddled on her favorite pillow that we hauled across the Atlantic for her and is so glad to be out of the hot car. We think tonight we might have a salad with some Italian tuna that we bought at the market here. And probably some of our wine. Our first trip was a good one. We will have many more, but for now we relax and listen to the sounds of the street in Anghiari. Voices speaking in the rhythmic way that defines Italian, children calling to each other, dogs barking, someone’s music playing softly, silverware tinkling against dishes. Think I’ll go sit by the window and watch the street scene unfold beneath me. There’s always something interesting going on.

2 thoughts on “We Explore”