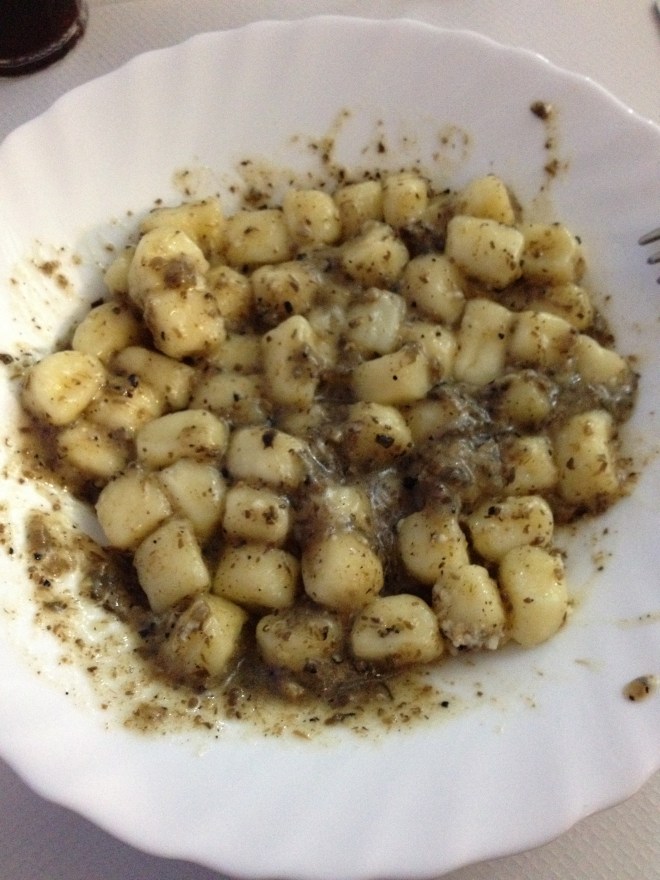 On our morning walk yesterday we saw a sign advertising the festival for the blessing of the truffles in a town called Chuisi della Verna. Yesterday was the last day of the weeklong festa and we decided to go. The sign said there was a dinner at 8:00 and an orchestra at 8:30. Not knowing what to expect, we loaded up in the BMW with no AC with our little dog and followed the signs to Chiusi della Verna. And we followed them. And we followed them. About 45 minutes later and about 3,000 feet higher we arrived in the little hamlet of Chuisi della Verna. We twisted and we turned and we went around curves that had no inkling of a guard rail until finally we were there. We learned a couple of very valuable lessons from this experience. One, whenever you go up any mountain after the sun goes down, bring a jacket and don’t wear sandals. Two, whenever you see a sign for a blessing of anything food related, go to it.

Truffles, or tartufo, as they’re called here, are a fall specialty. We thought it was a little early for a truffle festival, but after we got there, we realized that it’s been fall up there for weeks.
There were all kinds of tents set up with people selling everything from aprons to dried porcini mushrooms. The “orchestra” was already playing when we got there at about 7:45. It was a cute little band playing a lot of Italian folk music. Then there was a big tent set up where the real action was. The menu was posted out front and you picked what you wanted, paid for it, then went inside the big tent to await your truffle fantasy. There were maybe 40 tables seating eight people each in the tent (which, mercifully, had sides). We were seated in the dog section. We each got a truffle crostini (lesson number three – one order of truffle crostini for two people is a gracious plenty) and I ordered the gnocchi with truffle ragu and my husband ordered the ravioli with truffle ragu. We were in truffle heaven. Everything was wonderful, but if you’ve ever had truffle crostini and either gnocchi or ravioli with truffle ragu, you know how rich and filling it can be. We couldn’t come close to finishing and hated to leave even one morsel behind, but we had to. The place was crowded when we got there and packed when we left. The last night of the blessing of the truffles was well-attended and everyone left with a full stomach. We bought some dried porcini mushrooms (because I can’t ever pass them up) and some truffle oil. Then raced to our car because we were so cold and it was dark. We had a long drive back down the windy mountain road with no guard rails.

I grew up in the country. I lived on a dirt road. Neither the mailman nor the school bus driver came out to where we lived. But Chiusi della Verna was one of the most remote places I’ve ever been. It was, quite literally, in the middle of nowhere. You had to be going there for a reason, because there’s no way you could stumble upon it. It made Anghiari feel like Manhattan. Yet up there, in that remote little place, they had a blessing of the truffle celebration that drew hundreds of people. And that’s one of the reasons we love this country.

2 thoughts on “We Eat Truffles”