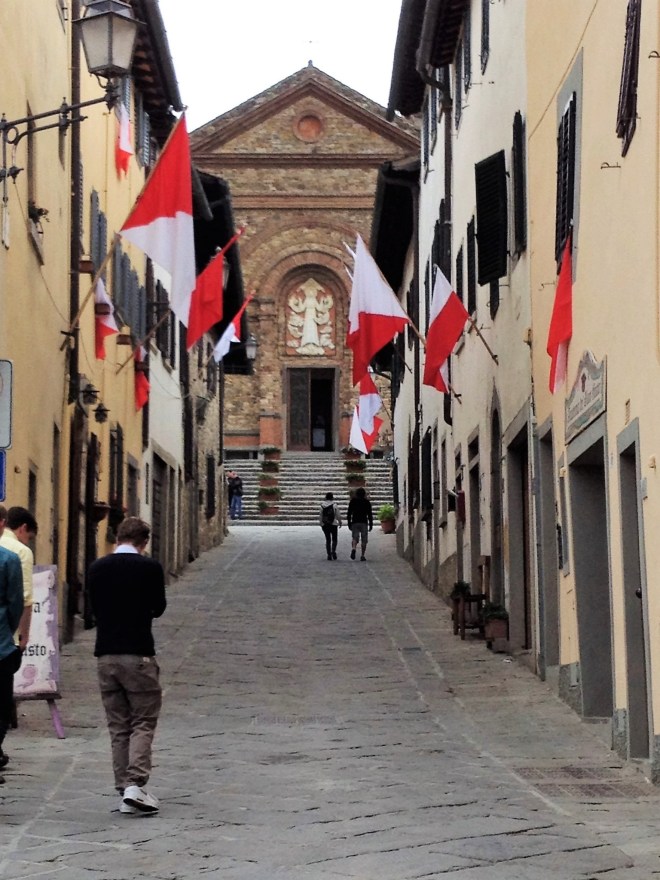 This trip is happening faster than I can keep up with.  This will be a catch-up post – just to let you know that wonderful things are happening here.

Between getting the apartment set up and visiting with friends we seem to have very little time.  Rough life, I know.  But you (I, anyway) need a certain amount of down time to really enjoy a vacation.  That’s what recharges me and makes me able to do the long-haul stuff.  But we’re on the go here.  Which is a kind of vacation for me.  We’re never on the go.  So this a little exciting and doesn’t leave much time for over-analyzing things.  You have to go with it – if someone asks you to lunch at the last minute, you go.  If someone asks you to dinner for that evening, you go.  If someone asks you to a concert, you go.  Italians have a very fungible sense of time and space.  I feel VERY American here.  I want to be able to go with the flow and lollygag here and linger there, but sometimes I don’t see the point.  Americans have to be going somewhere, have to be moving toward something.  Italians are perfectly happy standing still.  An impromptu conversation is just as important as the meeting you were on your way to.  I remember one of the first trips we took here after we opened our store, Bella Italia.  We were at one of our ceramic providers and had a great day touring around Gubbio with him, seeing his studio, and hanging out in his showroom.  We were planning to go to dinner that evening and it got to be 7:00, 7:30, 8:00 and we were still sitting around the studio talking.  One of us mentioned being hungry and it was like a light went off in the Italians’ head that maybe we should strike out for dinner.  Living in the moment is what it’s all about.

Thursday we went to lunch at Michelangelo’s.  Joining us was Rossella’s sister, Marieleana, her husband, Mario, their daughter, Cristina, and her daughter Lucretia.  And their dog, Camilla.  Thursday was Liberation Day here and while no one knew exactly what they were being liberated from, they all celebrated it just the same.  I think it’s a great excuse to extend the Easter holiday.  You’ve got Good Friday, Easter Monday, and and Liberation Day on Thursday.  Not much work gets done during this time and lots of people take the whole week for vacation.  And all the schools are closed.  Kind of like spring break.

This day was right out of a magazine spread on living the Italian life.  We had appetizers and prosecco in their garden.  The sun was brilliant and it was quite warm.  Hot, actually.  Then we moved inside for the feast.

Cappalletti in brodo, roasted duck and turkey, roasted potatoes, and salad.  Marielena made zuppa inglese for dessert.  This is a dessert that we’ve had many times, but never homemade.  It was wonderful.

After the last dish was washed and the last sip of caffee downed, we headed back down to Anghiari to tour the big festival that started that day.  It’s a market of local artists from all over the Tiber Valley.  It was packed.  So crowded that we bowed out and came back up to our little apartment and sat out on the terrace.  This event will be going on all weekend so there’s no need for us to tour it during a national holiday.  We can walk down anytime and take our time going through.  It was a beautiful evening and we sat out on the terrace and had a late dinner of bruschetta with Sicilian tomatoes, buffalo mozzarella, and fresh basil from our “garden”.  Perfetto.

Friday we met Giovanni and Paola and their son, Vittorio and his family – Elena, his wife, and Constanza and Giacomo, their two children.  We were going to Chianti country for lunch at Giovanni’s cousin’s house.  We’ve known for years that Giovanni’s cousin had a winery in Chianti and we’ve always wanted to go visit.  What we didn’t know was that Alfonso, his cousin, has a villa in the very center of town with a huge garden and a rambling, ancient house that has been in the family for 250 years or so.  There’s a surprise waiting around every corner here.  We thought we were going to tour a winery and have a little lunch.  We ended up touring a villa and having a feast.

Panzano is a little village near Greve in Chianti and you would think it would be off the beaten tourist path, but by the looks of things on this rainy Friday afternoon, it’s very much on the path.  We got a tour of the wine cellar – I’m sure they have another facility somewhere out of town, but this one had several big stainless steel tanks and several old, wooden casks.

Lorenzo, Alfonso’s son, runs the winery and gave us a brief tour and a little taste.  Then off to tour the villa where Alfonso lives.  It’s hard to tell where the villa starts and the shops on the piazza begin.  It’s all one big structure and interconnects in some mysterious labyrinth.  We entered the garden through a huge iron gate off the main street going into the piazza.  And what a garden.  Gravel covered paths leading to terraces that step down and turn to reveal other gravel paths that lead to terraces, water features, secret side gardens and a huge greenhouse at the very back which was serving as the winter home to a massive collection of citrus trees.  I can’t imagine moving all those trees out into the garden for the summer.  It must take quite a while and quite a lot of muscle.  Here we were right in the middle of this ancient little hill town in Chianti and you had the feeling you were out in the countryside.  Very quiet, despite the parade of tourists walking beside the old stone wall that divides this paradise from the rest of the world.

Then into the rambling villa.  What a place.  If they have never filmed a movie here, then they should.  It’s what comes to mind when you think of an ancient Italian villa that’s been occupied by the same family for over 250 years.  A little dark and piled with stuff – books, dishes, cross-bows, toy soldiers – crammed with furniture, and rambling through a series of rooms and hallways and staircases.  It was impossible to take it all in.  Apparently, the library has very rare books and Alfonso is distressed because he doesn’t have a male heir to leave them all to.  The granddaughters – well, they’re sweet and all, but they’re girls.  Maybe his son Lorenzo, who just got married last fall will produce a being worthy of such a bequeath.  Until then, Alfonso has devised an elaborate ritual where he has “knighted” all three of Giovanni’s sons and his grandson.  If no son pops up from either of Alfonso’s children, he’s got his bases covered with his cousins male heirs.  I am not making this up.

We wound our way through and came back out on the street near the cantina where we first started our tour.  Then on to lunch at the Cantinetta Sassolini, which is actually part of the villa on the street level.  It was the typical Italian family lunch.  Lasting over two hours and consisting of three courses and several bottles of wine.  Wow.  That’s all I can say.

We had everything family style.  So even though it was a huge amount of food, you could take a little of this, a pinch of that and at the end of it all you didn’t feel like you’d eaten so much.  Antipasti to start – salumi mista and crostini.  One of the hallmarks of Tuscan food is the chicken liver crostini.  Not my favorite, but it’s ever-present on any antipasti menu.  Then on to the pasta course.  We had chitarra (it means guitar strings) with cacio and pepe (cheese and pepper) and fava beans.  We also had maltagliati (thin pasta that’s irregularly shaped – maltagliati means badly cut) with ragu (not sure what kind of meat, but it was good).  Then tagliata, which is grilled chianina beef that is sliced.  And roasted potatoes, spinach, and white beans.  Steve and Giovanni had lamb.  And several bottles of Sassolini wine.

On the drive back to Anghiari (it’s about two hours) it rained almost the entire time.  Sometimes very hard.  I was so glad that a born-and-bred Italian was driving, especially on the autostrada part.  In the car, I was talking to Elena, who is about 42 and has a degree in anthropology, about the whole male heir and “knighting” thing.  After all, one of those “knighted” was her son.  I asked her why the granddaughters couldn’t inherit these valuable treasures.  Basically, she said that’s the Italian culture and it’s just the way it is here.  I asked her how she felt about that.  She struggled to answer it and I think she became a little uncomfortable with trying to come up an answer that made sense.  She said that women don’t work – usually they stop working when they marry and have children – so their worth is not as much a man.  That’s not exactly what she said, but that was the gist.  She said that in Italy women do not take their husband’s name when they marry and that their children can have either the father or the mother’s last name.  She wants to hyphenate her children’s names because she’s the last of the line of her family.  Vittorio won’t allow, so that’s the end of it.  I found it interesting that she was telling me this and saying why she wanted it and that he wouldn’t allow it right in front of him.   It was clearly a subject that had been discussed and settled and was not open for debate anymore.  She said that when children turn 18 they can change their name if they’d like.  She hopes at least one of them will do that.  As much as I love this country, there are parts of its culture that are unsettling to me.  What an incredible day.  One we will both remember for a very long time.

The rain continued on and off into the night, so we raided our fridge and cobbled together a nice little supper.  I love having provisions here.  Even though we’ve almost always stayed in an apartment while we’re here, we’ve never really cooked before on these short trips.  It’s nice to have the option of staying in when it’s raining or you’re just too tired to make it out to a restaurant.

Italy is a treasure of beauty, art, music, and food.  The people are very kind and friendly and take hospitality to a level rarely experienced.  I tend to see it through “vacation eyes”, but I have to keep reminding myself that it’s part of the real world and has real world issues and problems.  Many things I don’t like, like the patriarchal society.  I look at it this way – I’m a mature woman at the end of my career and sexual discrimination won’t affect me.  But maybe I can have a subtle influence on some young woman and make her think about the values and culture that brand her as not as valuable as a man.  Because, as we all know, she is perhaps more valuable. 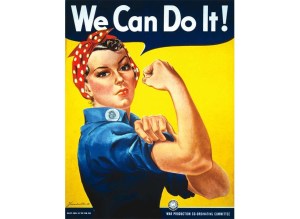 2 thoughts on “Too Much to Tell”