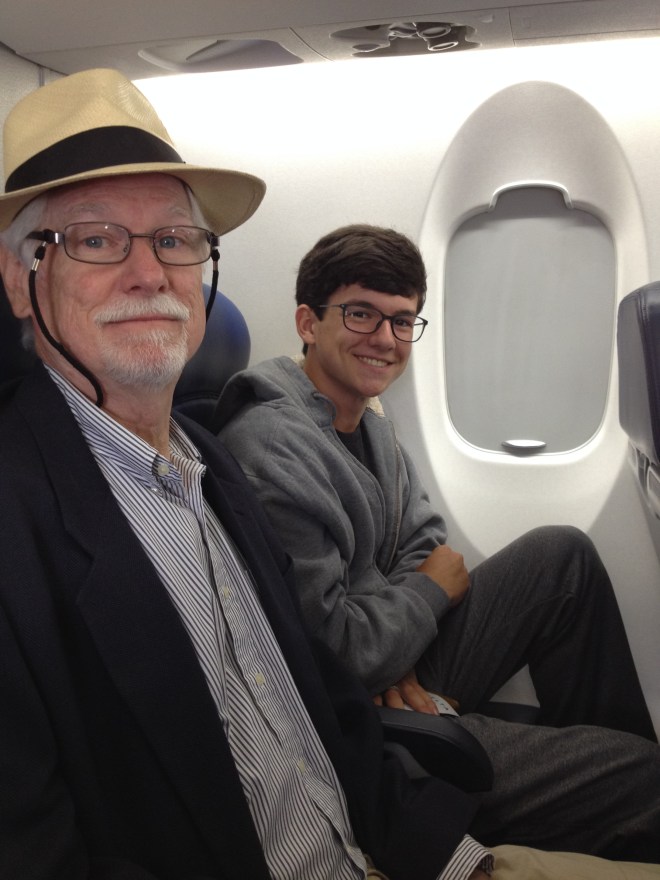 We’ve returned to Italy, but this time we are accompanied by our 18-year-old grandson, Hunter.  He just graduated from high school and will be starting Kennesaw State in the fall.  We’ve been coming to Italy since before he was born and all his life he’s heard us talk about it, show him things we’ve brought back, and look it up on maps.  We’ve always told him one day we would take him.  That day has come.

We left on Tuesday with high expectations and a long journey ahead of us.  We were certainly right about the long journey part.  What was supposed to take us 15 hours total travel time ended up taking 24.  The second of our three flights was about an hour late and that meant we couldn’t make our third flight.  We thought it would be easy to get another flight for that leg, which was from Paris to Florence.  And it would have been if all the flights had not been booked.  We had to wait at the Paris airport for eight hours for a flight that left at 3:00 pm.  Or was supposed to leave at 3:00 pm.  We boarded and everything looked good, until a bird flew into one of the engines and we had to have a mechanic come check everything out.  The problem was there was a strike in France that day and when we finally got a mechanic there and he did his thing, an hour and a half had passed.  The only good thing to come of this was that a friend of a friend was taking someone to the Florence airport about the same time we were supposed to land and he gave us a ride to our doorstep.  Otherwise we would have had to take a shuttle from the airport to the train station, get a train to Arrezo, then take a bus from Arrezo to Anghiari.  What ended up taking us a little over an hour would have taken almost two.  So that was our silver lining.

We were all beyond tired, grumpy, dirty, hungry and ready to stay put for a while.  So we had pizza.  In my experience, pizza makes almost anything better and here we were in the country which gave the world pizza.  We went to our favorite pizzaria on the piazza and had our first meal in Italy.  It did a lot to make us feel better.

Then we slept the sleep that comes after 24 hours of travel.  Deep, sound and long.

7 thoughts on “The Start of a Journey”