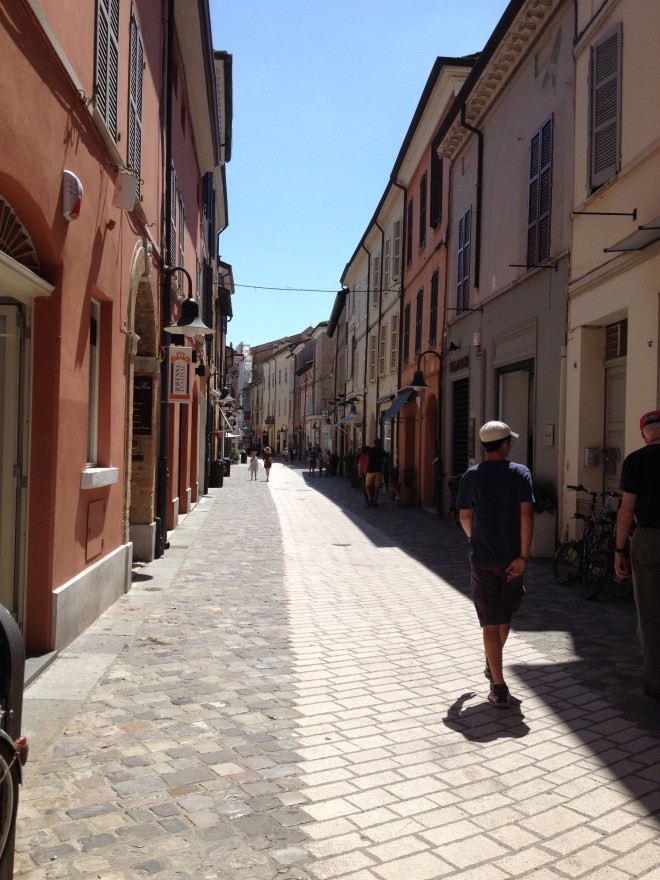 OK – I obviously didn’t finish this while we were still in Italy.  We’ve been back for almost two weeks and I haven’t found the time (or inspiration) to finish chronicling our trip.  So for those die hard Sprezzatura Y’all fans out there (and I know there are legions of you), I’m recounting our last couple of days.

Sunday was our last day in Anghiari.  Very sad.  It was a beautiful Sunday so we drove over to the Adriatic coast and visited Ravenna.  Ravenna is home to some magnificent mosaics – some say the best examples outside of Turkey.  It was a capital of the Roman Empire in the 5th century and later was under Byzantine rule after the fall of the Roman Empire.  There are a few ancient structures remaining, but most of the town was destroyed during WWII.  It’s an odd juxtaposition of ancient and contemporary.  And on this Sunday afternoon, it was pretty much deserted.  Most of the stores and restaurants were closed, although the historic sites were open.  We were lucky we found a great place for lunch (love the Slow Foods app) that was open.  We had a great meal outside in the shade with a nice breeze.

We toured the Church of San Vitale, the mausoleum of Galla Placidia, the Basilica of Sant’Apollinare Nuovo, and the bapistery The mosaics are incredibly beautiful.  It’s one of my favorite art forms because I can’t imagine how you put all those little pieces together to create the scale and dimension that you see.  It also is so vivid and brilliant, even after thousands of years.  Very durable.

After touring the little town, we drove over to the ocean to take a peek at the Adriatic.  Along with about 3,000 other people.  We then knew why no one was in the town of Ravenna – they were all at the beach.  People were walking and biking for miles to get to the beach. Cars were parked everywhere.  It was a zoo.  Steve double parked and Hunter and I hopped out to have a look.  There was plenty to see – skin, that is.  Skimpy bathing 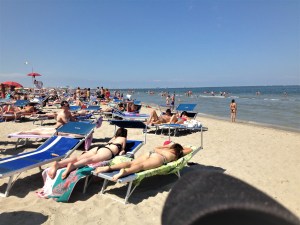 suits were a requirement, whether you had the body for it or not.  Hunter and I looked pretty out of place in our clothes, but we were undeterred.  I took my shoes off to walk to the shore in the thick sand (think Destin but grayer) and it was HOT!  I ended up scorching my toes a bit.  But I made it to the water’s edge and stuck my toes in the cool water.  Hunter didn’t want to go all the way to the water, but I thought that I had come all this way and by golly, I was going to make it to the water.  When we got back in the car and started making our way back to Anghiari, we played a little game about how much money it would take for us to haul our stuff out to that crowded beach and lay in the hot sun all afternoon.  Apparently, we all can be bought pretty cheap.  When you put cash on the line, things change.

Back in Anghiari we discovered an antique market all over town.  I remember these from when we lived here.  I think they have them once a month and I bought some really wonderful things.  Well, all Hunter had to hear was “antiques” and he was all in.  For an 18-year-old he really appreciates historical things.  Especially pens and watches.  And WWII memorabilia.  He bought another fountain pen and had a great time looking at all the wares.   So did I.  I love that in addition to the great stuff they have in this town, they bring in additional stuff on a regular basis.  You’re assured never to get bored.

For our last meal in Anghiari, we let Hunter pick.  He chose La Pineta – the beer garden that serves really good pizza.  It’s at the very top of town and the walk up really gets your appetite going.  As we were sitting there having our pizza, it actually got a little chilly.  Amazing.

We made our way back to the apartment to finish our packing for Florence.  Very sad to leave this place that we love – and now, hopefully – Hunter loves.  But we must go so we soldier on and try to stuff all the things we’ve accumulated over the past two weeks into our luggage. 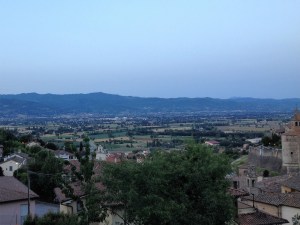