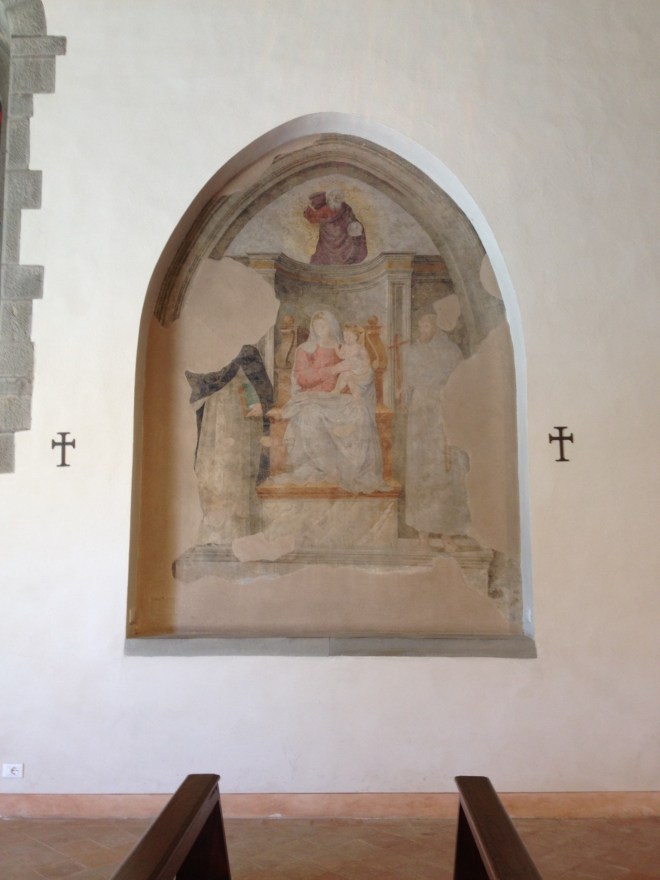 Autumn has arrived in our corner of Tuscany.  It came very suddenly after a violent thunderstorm.  It’s as if Mother Nature took out her scrub brush and washed summer away.  There’s a freshness to everything and a bit of anticipation in the air.  So we’re moving to heavier jackets and scarves.  No more sandals or short sleeves.  I’m sure we’ll have some warm days ahead, but there’s definitely a different feeling now.

The day before the cool weather arrived was so dreary with periods of rain, winds that would take your breath away, and just general gloom, we didn’t do much.  We wanted to go somewhere for lunch that we’d never been.  The only problem is the only restaurants we know are the ones we’ve been to.  I found one that looked interesting in the hills above Sansepolcro. We drove up there only to find it was closed.  Disappointed, we drove back down to Sansepolcro and had lunch at a place we love called Al Coccio.  It’s a little fancier than your average trattoria but the dining room is quite lovely and the food is wonderful.  They always give you a little amuse bouche, which I love.  That day it was a beautiful cup of squash soup.  We both had ravioli, Steve’s was whole wheat, which you don’t see much here.  It was with gorgonzola and walnuts.  Mine was the traditional spinach and  ricotta filling with a Chianina sauce.

We each had a glass of sangiovese wine from Grosseto in southern Tuscany.  It was wonderful and only three euro.  They bookend the amuse bouche with a perfect chocolate truffle at the end of the meal.  Divine.

Every time we have lunch in Sansepolcro we walk around town and window shop.  We window shop in lieu of actual shopping because everything in town closes for siesta.  We’re always ready to poke around in stores after our nice meal, but you have to wait until 4:30 or 5:00 to do that.  This is something that I have such a hard time getting used to.  I guess what we’re supposed to do is go back to the apartment and take a nice, long nap then get up and come back when we’re all refreshed.  Somehow it never works out that way for us.  By the time we get back to the apartment and take a break, we don’t want to get in the car and drive back over there.

Since it was a little chilly and still somewhat dreary, I decided to try my hand at making ribollita, a classic Tuscan fall dish.  It’s basically a vegetable and bread stew.  It’s a little different everywhere you get it, so I figured it would be hard to mess it up since there’s really no standard.  On the way back from lunch, we stopped at the grocery store and I got what I thought would go into it and came home and spent the afternoon cooking.  I did a pretty good job of getting the right ingredients after consulting several recipes on the world wide web.  Just to complicate things a little, I decided to make some chicken stock for the liquid.  I’ve made it before here and it’s the best stuff in the world.  This was no different – rich and glorious, it tasted like the most wonderful essence of chicken.  What do they sell us in the US?  These chickens are a completely different color than what we buy.  They’re yellowish – almost the color of a banana.  Not the pasty-whitish things we have. 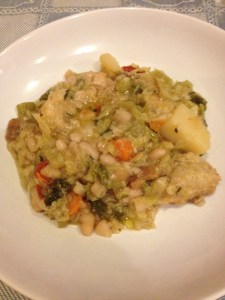 minestone that old bread was added to and then re-boiled to make a new meal.  From everything I read online, it’s best made the day before and re-heated so the bread can absorb all the flavors of the broth and veggies.  We’re Americans and we wanted to eat it immediately, so we let it sit for a bit and then dug in.  For my first effort, it wasn’t bad, although it was definitely lacking something.  We’ll see how it tastes tonight after it’s been sitting in the fridge.  I will say that the house smelled divine that afternoon and evening.

I love experimenting with cooking.  When I’m here I can ask locals how they make ribollita.  Although, the couple I’ve asked so far, Rossella and her sister Mariella, both said they don’t make it.  They buy it at their favorite restaurant because it’s so good there.  While that disappoints me a little, I understand.  I would say the same thing about fried chicken if a visitor from another country asked me about that staple of southern cooking.  Undaunted, I may try it again.  Or I may have it at one of the  many restaurants in the village.  That’s what the Italians do.

The Casentino area is in the next valley over from the Valtiberino.  It’s known for it’s beauty and ruggedness.  Also for food.  So we went for lunch.  We have been there a few times before, so we went to a restaurant we knew was great and it still was.  It’s in Bibbiena, which is in the heart of the Casentino valley.  The restaurant is called Il Tirabuscio.  It’s a little more upscale than a regular trattoria and reminds me of a place that might be on one of the chef shows that I like to watch.  Some of their dishes are completely re-imagined traditional things.  Like the appetizer we shared – pecorino cheese with pear.  A classic combination that you see all over this part of Italy.  This was classic, but not traditional. 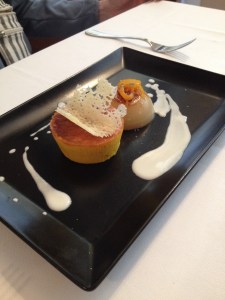 The pecorino was a souffle that had such wonderful pecorino flavor but was light and fluffy.  The pear was caramelized with a bit of ginger and orange peel, which is something you never see here, but was so wonderful.  All with a creamy cheese sauce and a parmesan crisp. 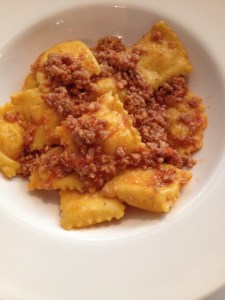 del casentino.  This was very traditional and was served with a sauce made from the grigio (gray) pigs that are common to this area.  This dish was so good it was heartbreaking.  The tortelli are similar to ravioli but are stuffed with potatoes.  You won’t find this preparation anywhere else.

I had the pappardelle with anatra (duck) sauce.  This dish is 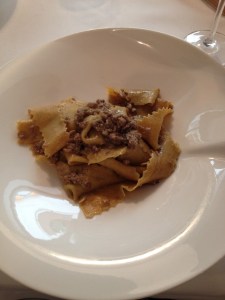 common all over Tuscany and I love it.  This pasta was made with whole wheat flour, something we’ve noticed quite a bit here now.  This is new – a year ago I don’t think you would have see this.  It was very good, but Steve’s was the real winner of the day.  Then we shared a chocolate thing for dessert.  Neither of us were quite sure what it was, but it was chocolatety goodness.

After lunch, we drove up to another monastery called Camoldoli up in the mountains.  What a wonderful place.  This one is much more visited than some of the others we’ve been to, but I’ll say one thing about monks – they know how to pick their spots.  Just gorgeous.  This one had a pharmacy, where the monks have

been producing herbal cures since the 16th century and still are going strong today.  We bought several things and are hoping for big results.

I love just wandering around.  Seeing things we’ve never seen before.  We are really trying this trip to go to familiar places, but to always try to do or see something that we’ve never done before.  It makes me realize that we haven’t even scratched the surface of this magical and historical place.  But we’ll keep on trying. 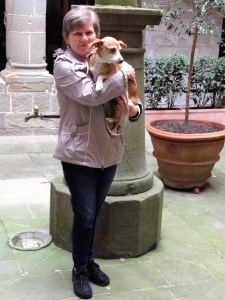