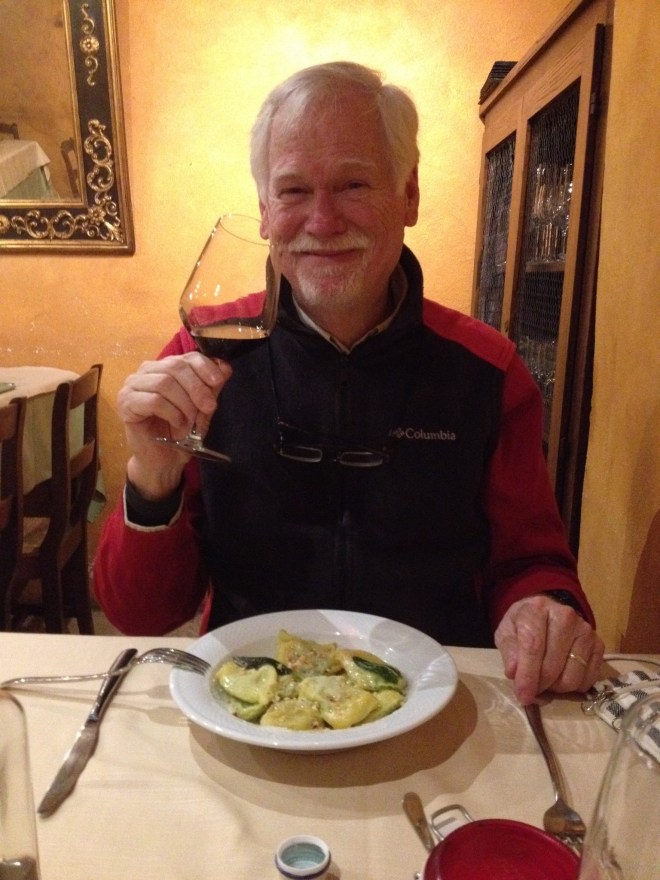 I’m a little far behind on writing of our adventures at Villa Chiassolo.  That’s the name of our house.  It’s a completely made up name, but still, it’s ours.  In the interest of time and trying to prevent boredom, I’m going to do a recap of our food over the past few days.  You won’t believe what we’ve consumed.  I’m not proud of it – well, maybe a little.

We had lunch the other day at a little place on the piazza called Al Cantuccio.  This is one of the most unique places I’ve ever been to.  The locals call it “Ciccolino’s” because that’s the name of the owner.  He and his wife, Domitilla, run it and they are always in there.  She works out front and he cooks.  There’s no menu, no table service, it’s unclear when and how you pay, and it’s the size of a postage stamp.  We snagged a table and looked over the offerings which are displayed in a big case next to the kitchen.  It’s all made fresh that day and it changes daily.  They always have pizza by the slice, which is nice.  The day we were there they had some kind of pasta, pizza, porchetta, coniglio (rabbit) with olives, and acqua cotta.  Acqua cotta means cooked water.  It’s a very unique dish to this part of Italy and it’s made with whatever you have available.  It’s much more than water, let me tell you.  The one they make is like a casserole-type thing that has bread, eggs, mushrooms, onions, and God knows what else.  It’s really good and that’s what I got.  Steve had the coniglio.  It was great and we left there very happy.

One day we made a futile trip to Perugia, which is about 45 minutes away.  We were in search of an IKEA, which the world wide web told us we would find there.  Hard to believe, but it was wrong.  Dejected, we started back and, lo and behold, realized it was lunch time.  I consulted my handy Slow Foods app and we went to a great little place near Umbertide (surprisingly, this is pronounced um-BEAR-tee-dee).  I love my Slow Foods app.  We’ve been to some of the greatest places using it – places we would never find on our own.  This one didn’t disappoint.  It was called Nonna Gelsa.  Nonna means grandmother and I have no idea what Gelsa is – hopefully someone’s name.  It was the cutest little place and we were the first customers (at 1:00).  As the locals streamed in, they were all men.  Except for the waitress, I was the only woman in there.  We had a feast.

Bruschetta to start.  This is a typical Tuscan appetizer.  In the photo from the left is plain bruschetta (just toasted bread), bruschetta with tomatoes, bruschetta with lardo (yes, it’s just what you think it is), and bruschetta with liver.  The liver is very typical here.  Not my fave, but Steve loves it.  I hate to admit it, but the one with lardo was my favorite.  If you don’t think about what you’re eating, it’s magnificent.  The lardo is warm and melty and tasting of the most wonderful pork ever.  Just don’t let yourself think that you’re eating pure fat.  Pure fat on bread.

Then I had ravioli with asparagus and guanciale (pork jowl).  Steve had the farro soup with mixed vegetables. But wait, there’s more!

We rarely have both a pasta course and a meat course, but we were trying to soothe our wounds from driving to the phantom IKEA.  I had sausage and Steve had the mixed grill.  Yummy.  We’re not sure what all was on the mixed grill plate, but it was all good.  Sometimes it’s best not to know.

One night we went to dinner at a restaurant in town that is sometimes open, sometimes not.  This night it was open and we had a great meal in a very cozy atmosphere.  As much as I love Italian food and they way Italians think of food, most often their restaurants are a little lacking in the atmosphere department.  They’re starkly lit, simply and rustically furnished, and just overall not pleasant places.  This place, Per Bacco, has a better than average ambiance.  We had a great meal there.  I had the ribollita and Steve had the ravioli.  Then Steve had a side of spinach and lemon and I had a side of fried mixed vegetables.  And creme caramel for dessert.  We also had a great bottle of wine – a Rosso di Montefalco, and it was divine.  All for under 60 euro.  I think the wine alone would have been $60 in Atlanta – if you could find it, that is.

We’ve eaten very well since we’ve been here.  We’re on vacation and we don’t hold back.  We don’t say no, or we’re cutting back on carbs, or we’re trying to watch our fat intake.  We say “Yes, please” and enjoy it.  We also walk like crazy.  To walk anywhere here is to get a workout.  Up hills, down hills, up stairs, down stairs – that’s the way it is.  Nothing is flat and nothing is easy.  That’s why you can eat and drink like crazy and not feel so bad about it.  Well, that and you’re on vacation and we all know that calories don’t count on vacation.

One thought on “Mangia!”