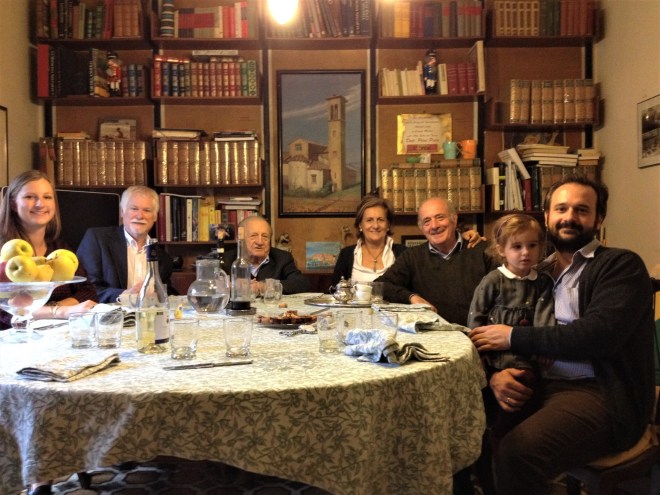 The astute reader of Sprezzatura, Y’all has realized that most of our activities revolve around food.  Well, part of the reason is because food is central to Italian life.  Meals are social, familial, and bonding experiences.  Few people come away from a meal hoping to never see those people again.  You might start out with caution, but by the end you’re family.  Another part of the reason is because the food is so darn good here.  And yet another part is because we’re gluttons.

Today we revolved around our lunch with the Busatti’s.  They are how we discovered this place and how we met Michelangelo and how we came to know Italy in such an intimate way.  Having lunch with them in their home is a wonderful thing and today we were joined by 96 year old Dr. Plini.  He is the father of Paola, and the house is referred to as Dr. Plini’s house.  All the children of Paola and Giovanni don’t say “my house”, they say “the house of my grandfather”, even though they all lived there.  Make no mistake, this man is lord of the manor.  But he is the dearest, sweetest gentleman on earth and he always wears a sport coat.  Today was rainy and quite chilly and he came down to have prosecco and potato chips with us before lunch and wanted a blanket over his lap.  He kept apologizing for how bad he felt because of the weather, but the more wine he had, the better he seemed to feel.  By the end of lunch, some three hours later, he was laughing and talking – but  not hearing.  He deaf as a doorknob. But he refuses to wear his hearing aid.  Most elderly people I know refuse to wear them, but his reason is the most compelling of all.  He says that they gave him a used one and he hears the person who used to own it.  Kind of like a hearing aid ghost.  What he is hearing is the “battery low” warning that so kindly tells you when you need to replace your batteries.  Instead he thinks he’s hearing some messages from the poor souls who used to have these hearing aids.  Don’t you love that story?

Dr. Plini loves Steve because Steve has no fear of Italian.  He mangles it, but he tries to speak it.  And he speaks very loudly.  And that’s good for Dr. Plini.  In fact, I think he wonders why everyone doesn’t speak like Steve.  In that case, he would have no need for the ghost hearing aid.

After lunch we just took it easy, went to the grocery store, and walked around town.  We had a little dinner at the pizzeria on the piazza because nothing else was open.  One thing I have a hard time getting used to is when things are open and when they’re closed.  Signs mean nothing.  We were all set to go to a restaurant here and checked the hours that are posted on the door.  When we got there, they were closed.  Even though the sign said they should be open.   What I don’t understand is if the Italians just understand that signs mean nothing or if they have some inside intel that we don’t and they know that this particular Tuesday night that particular restaurant will be closed for some particular reason that doesn’t warrant a posting.  I may never know the answer to this. 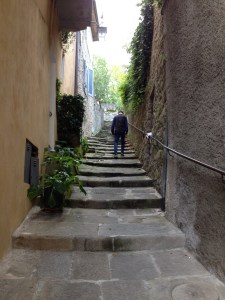