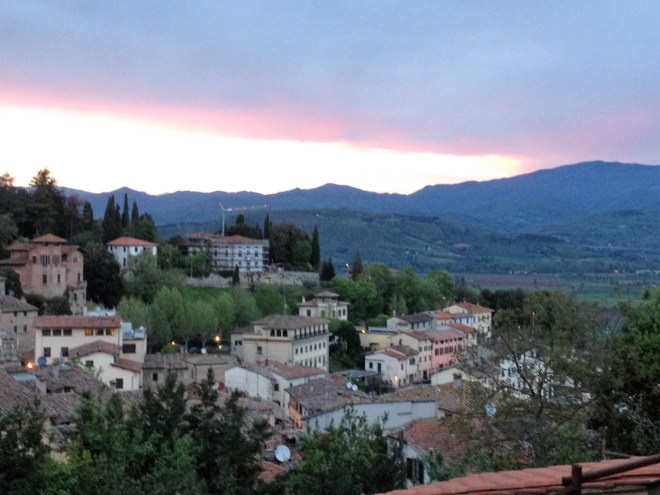 Moving through this area you are reminded of just how ancient this civilization is.  Thousands of years of groups of people coming together to make a place to live.  Improvement upon improvement – and it’s all still there.  This amazes me as an American because we’re such a young country and we don’t really respect the past like they do here.  Especially in Atlanta where we have a heritage of tearing down and building up.  It’s served us well, but at what cost?

We walked through Sansepolcro the other day and passed by the old city walls. 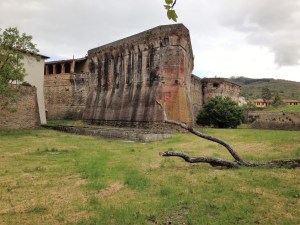 We just stopped and looked at it.  How long has this been standing here, just keeping watch over what the modern world has to bring?  And you have to imagine what this might have been like those hundreds of years ago when this was the boundary of the city.  Italy has a way of preserving the ancient and celebrating the modern all in the same breath.  But I wonder, do they stop and look at this ancient beauty like we do?  Do they take it for granted and pass by it while they’re thinking of what they have to do later that afternoon?  I like to think they do both.  They live with it everyday and in the hustle and bustle they don’t pay attention; but when they have time or need a reminder of their fleeting existence here they stop and look and use it as a touchstone to the humanity they are a part of.

Tuesday was our last full day in Anghiari.  We turned our car in and packed the suitcase.  The good thing is we’re going home with considerably less then we came here with.  We’re leaving behind one large suitcase, the contents of which have been absorbed into this house.  For our last day, we had a simple lunch at Ciccolino’s on the piazza.  This was our 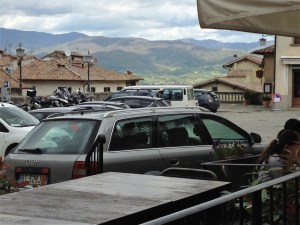 view as we sat outside on their terraced patio.  If you look past the cars that jam the piazza, you can see the tranquil valley below.

We tried to squeeze every second we could out of being in the apartment.  We went outside between showers.  The weather here is absolutely amazing.  We can watch the rain come in across the valley and see patches of sun on either side of the storm.  Then in a few minutes it will be over us.  A few more minutes and it will be sunny again.  The weather is kind of like the Italian attitude.  Don’t get bothered by anything because it will change soon enough.  Giovanni told us the saying around town is that when there are clouds over the mountains, Anghiari should get its umbrella ready.  True.

Last night we had dinner at Stefano’s apartment.  He lives just a short stroll away in the ancient part of town.  He lives in what we call the West Paces Ferry part of town – along the huge, ancient city wall that rises out of the Tiber Valley to define this town.  The views are incredible from here and his apartment has the one and only balcony.  As we were standing on the balcony looking toward Sansepolcro, I asked Stefano if he looks at the this view and sees it for what it is or if it’s become common to him. He said sometimes he doesn’t really see it – like when he’s busy or getting ready for work.  But when he’s troubled or needs to soothe his soul he comes out and takes it in.  That made me feel good.  I want so much for the people who live here to appreciate the beauty of this place.

He invited us over for a “concert”.  This being Italy we didn’t ask questions (we’ve found that just creates more questions and doesn’t answer anything), we just said “Sure!”.  Come around 8:00 he said.  We went, not knowing what to expect.  We got there and he and some friends were preparing a feast.  A great spread of antipasti, pappa al pomodoro, lasagna, roasted potatoes, and crostata and muffins for dessert.  We had a lovely dinner and then were treated to a concert.  Rossanno, a good friend whom we’ve known for years, Lauda, and Marco (new friends we just met last night) have a little trio and Stefano turned his living room into a stage.  It was a blast.  They played some American standards like Fly Me to the Moon, Stand By Me, Sitting on the Dock of the Bay, and some Italian standards that everyone sang along to. 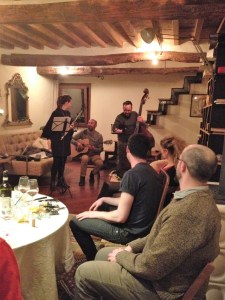 They asked Steve to be the guest singer on the American songs.  I took videos and will show those of you who want to watch them – I suggest drinking a lot before watching.  It was hysterical and so, so much fun.  A great last night.  We left there at midnight – the first to leave and as we were leaving another couple was just arriving.  Don’t you love Italy and young Italians?

We have come to the end of this adventure.  Today we take the train to Rome where we will fly back to Atlanta tomorrow.  We’ve spent our last night in Villa Chiassolo.  It’s been a good trip and we’ve settled into our apartment nicely.  We’ve met new friends and come to love the old ones even more.  And we’ve come to love this town even more.  Even though we’ve been here many, many times and lived here for six months, this time we really feel at home.  For the first time, we’ve leaving things here and when we come back we’ll walk back into this apartment with our very own key and have our own things waiting for us.  It’s a root – a small one, but a sturdy one. 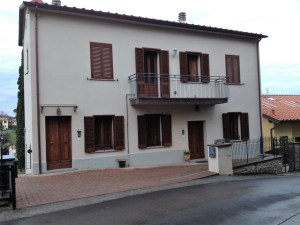 6 thoughts on “It’s a Tuscan Thing”