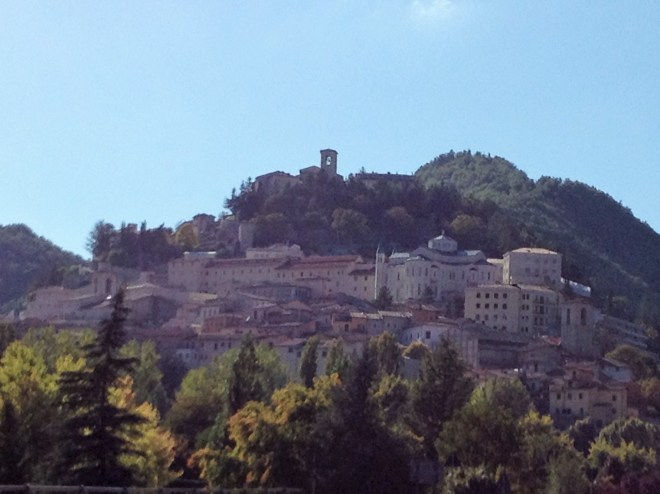 I hate to start the countdown, but we only have ten days left in Italy.  I think of all those lazy days we spent lounging on the terrace or cozy in the living room and I wonder why we weren’t moving every second.  That’s the panic in me talking – I wouldn’t trade any moment of what we’ve done.  It’s great to have a vacation long enough that you can have quality down time.  It’s much better, for me anyway.

Saturday was one of our last days of absolutely nothing planned.  We decided to drive to Norcia.  Norcia is in Umbria and is a very well-known food destination.  It’s about a two hour drive from here and is actually a fairly nice drive.  Italian roads are interesting.  The big highways, the superstradas, are generally in terrible shape.  The surfaces are bumpy and all need to be redone.  Plus, they’re always working on them.  It’s like they patch a little section at a time instead of completely resurfacing the entire highway.  Italian friends tell us that’s how it is here.  Friends of those in power get the contracts and they drag it out and use cheap materials so that it becomes a perpetual project.  Whatever the reason, the roads are constantly under repair.  And the ones that aren’t under repair are bumpy and lumpy and very unpleasant to ride on.

Norcia was the epicenter of a huge 6.2 earthquake in October of 2016.  We had visited Norcia in February of that year and just loved it.  We were curious about how it was faring after the earthquake.  Three years later and the town is still pretty much decimated.  Most of the shops and restaurants have set up temporary locations at the bottom of town.   There are a few places still operating in the city, but not many.  The cathedral, San Benedetto, was almost completely destroyed.  Here’s a picture I took in 2016 and one I took on Saturday.

The town was devastated.  It was like looking at the destruction 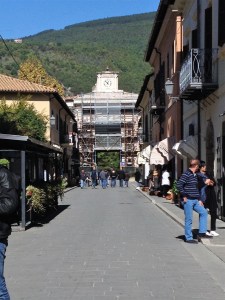 caused by a tornado.  One building decimated, the next not touched.  It was very sad for us to see what had happened in this wonderful little town.

We left there much sadder and hungrier than when we arrived.  We were planning to have lunch there, but there was really no place to eat.  We decided to drive to a nearby town, Cascia, which I had circled on my map.  Whenever anyone tells me about a great place we should go, I circle it on my map.  Then I forget who told me and why we should go.  Cascia was just a few miles from Norcia and it was circled so we went.  We stopped at an emergency place for lunch.  Emergency because I had to go the bathroom – bad.  It looked promising and was just outside Cascia so we tried it.  It was OK – not great by any means.  Oh, how I hate wasting a meal here.  But the circumstances dictated immediate action and we made our peace with it.  When we got to Cascia, just a few minutes away, we realized that we had been hasty in our decision.  We just didn’t know what was around the bend and took the sure thing.

Cascia is a beautiful town – really out in the middle of nowhere.

It was surprisingly crowded.  We couldn’t figure out why – it’s hard to get to and while it’s quite lovely, there’s not much there.  Come to find out it’s the home of St. Rita.  My Catholic husband 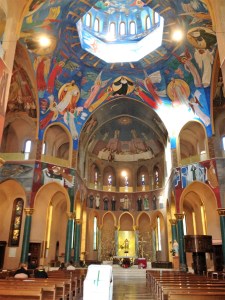 had no idea who St. Rita was, but she’s a big deal in Cascia.  She even has her own church at the top of town.  It’s one of the most colorful churches I’ve ever been in.  Not only is it her church, she’s still in there.  St. Rita herself is lying there in her glass box like a monastic Snow White.  St. Rita is the patron saint of impossible causes.  Apparently, she wanted to join a convent at an early age, but her father would not hear of it.  He arranged for her to be married at age 16 and she dutifully did what she was told.  Two children later, her husband was murdered by political rivals.  Her two sons wanted to exact revenge and she pleaded with them not to do it.  She prayed and begged and tried everything she could to prevent any further violence.  She got her wish, except not exactly in the way she had hoped.  Her two sons died of influenza, preventing them from carrying out their murderous intentions.  She then worked valiantly to mend the bad blood between the two families.  This was pretty much unheard of in those days and since she was successful in bringing peace between these rivals she was hailed as the saint of impossible causes.  I think hers is one of the most tragic saint stories I’ve heard.  We don’t have saints in the Baptist church, so I’m a little new to all this.  But most of the saint stories I’ve heard are a little happier than this one.  Oh, there’s sadness and suffering – that’s the foundation for sainthood.  But usually there’s some happy ending or miracle or some other heart-wrenching moment.  This one was just sad from beginning to end.  But one of the more interesting things about Rita is that she’s been known to sit up in her glass box and even levitate.  Now that I would have like have seen.  That might have made me convert to Catholicism.

After we got back from our outing, we had our happy hour on 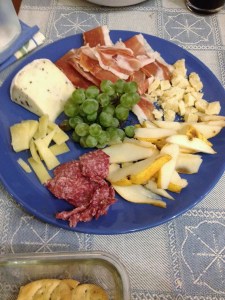 the terrace.  As luck would have it, the Georgia game came on at 6:00 our time, so we got to listen to that during the evening.  We had a little snack of salami, prosciutto, cheese and fruit and relaxed in our our hilltop oasis.  The game didn’t turn out so well, but our evening was great.

After the game was over, we went out on the terrace and heard music coming from town.  Down we went to see what was going on.  There was a big soccer match between Italy and Greece for some big title and one of the bars was having a party.  It was an interesting affair.  They had their one little TV that’s always tuned to some soccer game no matter the time or day.  Some serious, die-hard fans stood around it and watched.  Most people spilled outside, drinking and laughing without much concern for the game.  There was music playing and lots of merriment and lots of very young people enjoying it.  We hung around for a minute, then decided to go to the sports bar to see what they doing for the game.  We call it the sports bar, even though that’s not really what it is.  It’s called Bar della Sportivo, which generally translates to sports bar, but that’s mainly because the former owner ran a very lively, and quite lucrative, poker game in the back.  The new owner obviously has no interest in sports because not only was there no TV tuned to the game, he didn’t seem to be aware that there was a game.  We ran into our friend Carlo, who’s getting married on Sunday, and his partner, Armando.  We had a nice chat with Carlo about the wedding plans and bid them a good night and sweet dreams on their wedding eve.

Another wonderful day for us.  A friend of mine laughed about one of my recent posts which contemplated how many perfect days we’re allowed.  She said that was the Baptist in me and that I should come over to the Catholics and just be forgiven every week and get to start all over.  It’s true that Baptists generally feel guilty for experiencing joy and feel like they’re not worthy of perpetual happiness.  At least, those were the sermons of my youth, which explains why I chose not to continue to explore this religion as an adult.  But now I know about St. Rita and impossible causes and will always wonder if in some dark chapel in a little hillside town in remote Umbria, St. Rita herself may be sitting up in her glass box causing the faithful to be either terrified or amazed.  I would choose to be amazed.