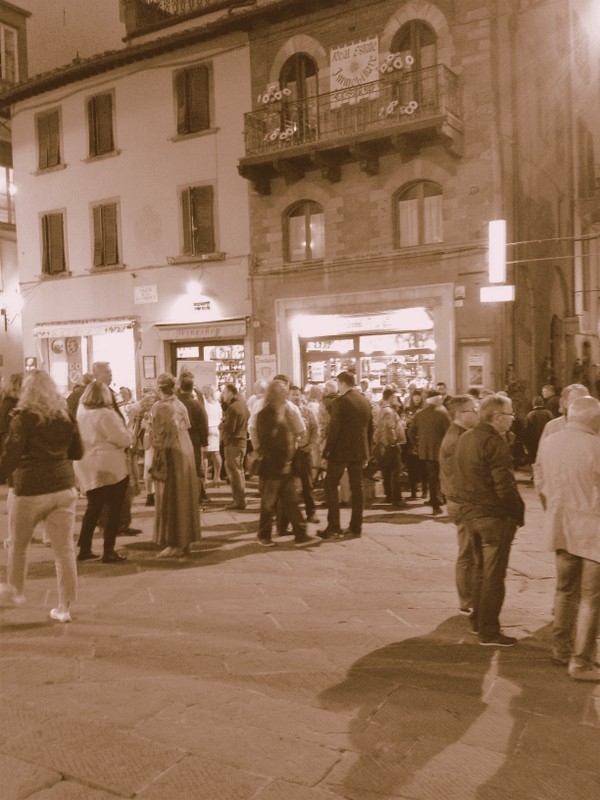 You know, the world is a funny place and life has many hilarious quirks.  As it turned out, two other couples from Atlanta that we share a love for Italy with are enjoying their Italian vacation at the same time we are.  We made plans back in Atlanta to meet in Cortona and attend a wine dinner sponsored by an Italian wine exporter who we all know.  So Wednesday, we packed up and headed over the mountains to Cortona, about an hour from Anghiari.

The drive from Anghiari to Cortona is incredible.  A lot of it is a windy mountain road, really little more than a goat path, offering some of the best views ever.  You’re hugging the side of the mountain and each turn provides another magnificent vista.  But there are no guard rails and you soon realize that if you miss a turn or take one a little too fast, you will become one with the magnificent vista.  This does not bother Steve, who is driving, but it bothers me a great deal.  Every time he says “Look at that” I say “Watch the road”.  And so on.

We got to Cortona and followed the Google Maps directions to the hotel.  Well, we tried anyway.  Our hotel is in the historic center of Cortona and driving in the these ancient hill towns is almost as much of an adventure as driving the goat path to get here.  Most streets are barely big enough for one car to squeeze through, let alone all the troves of tourists meandering happily through what they think are traffic free streets.  Some streets prohibit cars altogether and some are limited to permits only.  I’m not sure Google Maps know all this.  We turned up in a little piazza and saw two police women and stopped and asked them for directions.  After halting Italian (on our part) and rapid Italian (on her part), she finally asked if we spoke English.  We try – Lord knows, we try!  Just then an older woman walks by and says “Casa Ambra?”  “Si”, we say.  “Follow me” she says and we inch along after her around the corner where the hotel is.  Turns out, her daughter owns the hotel and she lives just across the street.  We pull up to find our friends gathered out front.  Cathi and Chuck, Jim and Judy were joined by Steve and Cathy.  We were the odd couple out since our names don’t start with the same letter.

We got there just in time for lunch and Judy had made reservations at Cortona Bistrot.  Jim and Judy have known the owners for many years and go there often when they are in the area.  We had a fantastic meal, each telling highlights, and low lights, of their trips so far, and what we would and wouldn’t do again.  Lunch was a pasta feast and I had a great Pasta alla Gricia, which is a luscious combination of pork jowl and pecorino cheese which meld into a creamy, salty, meaty bowl of deliciousness.  I don’t know what anyone else had because I couldn’t raise my head from my plate long enough to look around the table.  If that wasn’t enough, as we were walking back to the hotel, I had a gelato.  Well, what can I say?  I’m in Italy and I love gelato and even though my stomach is begging for a break from the constant bombardment of food, I can’t resist.  It was wonderful – limone and caramella.  Sounds like a strange combination, but it was great.

The wine dinner was in a great restaurant called Pane e Vino.  It was quite a feast.  The restaurant was in Piazza Luca Signorelli.  We were served a crisp white wine with salami on bread as we waited out in the Piazza.  It was clear and quite cool outside and it felt great to be out on this magnificent piazza with good friends starting our dinner together.  We moved inside and the real food and wine started coming.  We started out with the most interesting antipasto.  Two quail eggs over something we couldn’t figure out – some kind of rice or potato cheesy gratin type of thing – sprinkled with black truffles.  It was a really good dish, but quite filling.  Next was ravioloni stuffed with eggplant and cheese.  This was a new combination for me and I was a little skeptical because I’m not the biggest fan of eggplant.  However, it was quite good.  The eggplant was cooked just right and was not overpowering at all.  Next was roast chicken with red and yellow peppers.  Simple but classic Italian preparation.  Dessert was another interesting combination.  Red wine must (which is the first step in the wine making process – basically grape juice) with yogurt and nuts.  It was very good and I thought it would also make a great breakfast.  Not a heavy dessert – perfect after the over the top meal.  Each course was paired with a red wine – the best one was with the chicken.   Dinner started at 8:00 and we finished up around 11:15.  We were full of food and wine and quite tired and all fell right into bed.

We met for breakfast the next morning and then Steve and I had to leave for Pienza to meet our friend Francesco for lunch.  Francesco lives in Montepulciano, which is just a few miles from Pienza, and he took us to his new favorite restaurant.  It’s been there for many years, but he’s recently discovered that they make pici pasta just like his grandmother made.  It’s called Dal Falco and it’s just outside the main porta to the old city.  In honor of Francesco’s grandmother, we all had pici pasta with ragu.  If this was like his grandmother’s, I can see why this is his new favorite restaurant.  It was incredible.  Pici is long, thick pasta that is rolled out by hand, so each piece is irregular.  Some are little thicker than others. If you see pici that’s all the same size, you know it’s machine made and probably dried.  Not that there’s anything wrong with that, but this was the real deal.  And the ragu – a classic bolognese sauce – I really, really wanted to lick my plate.  He also ordered a plate of mixed roasted meats for us to share.  Sausage, pork, beef, and lamb.  It was wonderful.  We left there stuffed to the gills, but very happy.

Francesco is a professor of art history specializing in Egyptology and is a colleague of our daughter-in-law’s.  He and his wife Olivia have two children and they had us to their home when we lived here.  Olivia has been facing some very serious health problems over the past year or so and was not strong enough to visit with us.  As we talked to Francesco, I said a little prayer of thanks for my health and that of my family, and a little of prayer for them to get through this.  He is also facing some work challenges.  Such a wonderful person – it is heartbreaking to see him have to weather these storms all at once.  Our visit was very nice and I hope was good for him.  I wish him and his family nothing but the best.

Back to Anghiari after lunch to meet our Italian teacher, Antonio, for a drink.  When we lived here, Antonio would come to our apartment and give us a weekly or twice weekly lesson.  It was so hard and I’m pretty sure we were not the best students he ever had, but we had a great time learning about Italian culture and the area of Anghiari as we conjugated verbs.  He caught us up on everything that has been happening here and what he has been doing.  We asked if he was still seeing the same girlfriend and he said he was and that she was sitting at the next table!  There were a group of women there when we got there and she was among them.  So good to see him happy!  He’s the best (and cutest!) Italian teacher on the planet. 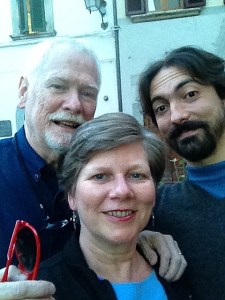 Today was the best kind of day to me.  It was a little hectic – driving a lot and having quick visits here and there – but it was so good to see people we know and love in the land we love.  We have less than a week left on this trip.  Still have people we haven’t seen yet and others that we have to see one more time.  The time we have left is very measured and quite full.  But it’s full of wonderful things and people and going from one rendezvous to another will be a joy, not a chore.

Tonight we took it easy – we were both still so full from the lunch with Francesco that we skipped dinner – imagine!  We stayed in the apartment and caught up on things and just talked and relaxed.  Tomorrow we’re back at it again, but for tonight we’re sitting in our apartment feeling so at home and comfortable and the only thing in the world we wish for is our little Millie to be sitting here with us.