Our interlude with Tim and Julie has come to an end.  It was an action packed few days and I think we may have done irreparable harm to their digestive systems, but it was great fun.  Friends make everything better, don’t you think?

Food.  We ate so much of it.  Each bite was delectable and every calorie worth the extra roll around the middle.  Thank God for whoever decided to add spandex to denim.  Saturday may have been the most food I’ve ever eaten in one day.  Including Thanksgiving when it’s your duty to stuff yourself.  We went to lunch at Giovanni and Paola’s.  We had a great visit with them, Livio, Stefano, his girlfriend Ludovica, and Dr. Pliny, Paola’s 96 year old father.  Ninety-six but still the master of the manor.  Pasta with zucchini fresh from their garden, thinly sliced roast turkey, roast chicken, potatoes, a spinach pizza kind of thing, salad – a real feast.  And wine, wine and more wine.  Because Dr. Pliny is 96 and master of the manor, he likes it hot.  Really hot.  He had on a wool tweed sport coat and who knows how many layers of shirts and the radiators were pumping.  It was a beautiful day outside – warm and sunny – but we were toasty inside the house.  Ludovica opened the window at some point and he ordered it closed because of the breeze.  For dessert we had gelato that Paola made herself – it was very good and based on the recipe she gave us, quite easy to make.  Giovanni told us that as he was leading Dr. Pliny upstairs for his post-lunch nap, he was chastising Giovanni for serving “inferior” wine to guests. Dr. Pliny likes the wine that he buys from the local farmers. Homemade stuff.  Giovanni had the great bottles from Chianti that his cousin produces.  Apparently, the Chianti is not fit for company.  We had both and I will say that the homemade stuff was not bad.  But not as good as the Chianti.  Sorry Dr. Pliny.

After lunch we drove up to Il Fornello, Giovanni’s country house.  He gave us the keys and told us to spend as much time as we’d like there.  It’s such a peaceful place, serene and quiet with incredible views.  I never get tired of seeing the castle across the valley on the opposite hill.  It was Charlemagne’s castle.  Charlemagne.  Imagine.

That night we went to Michelangelo and Rosella’s for dinner.  That’s always a super-human amount of food and we were already stuffed from our lunch.  I will say that we rallied and did a very respectable job of cleaning our plates.  Lasagna, mixed roasted meats, potatoes, peppers, and English salami for dessert.  English salami is a trifle-type thing with cream, chocolate, a bright red liquor called Alchermes, and sponge cake.  There’s a story about why it’s called English salami, but I can’t remember it.  We had a great time with them, laughing and talking and just generally enjoying each other’s company.

Saturday night we went to bed as full as big, fat water balloons.   We knew that it would be a challenge to get through the day without hurting anyone’s feelings and I think we did a great job of that.  Italians believe in a healthy appetite and don’t understand if you don’t clean your plate.  We cleaned ours, both times.  It was also a time of goodbyes.  For Tim and Julie, it was the last time they would see any of these wonderful people.  If Italians know how to do anything, it’s to send you off with a great last memory. 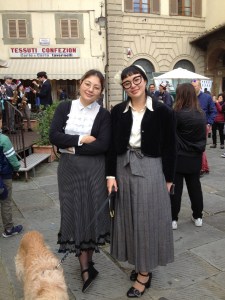 dress in vintage costumes and there are old bikes, old motorcycles, and old cars roaming around.  The town band was there, there was a roving emcee who was interviewing past winners and just generally getting the crowd revved up.  The priest came out and blessed the bikers, threw holy water their way, the band played what we assumed was the national anthem, and the bikers were off.

It took a while for 1,000 bikers to make their way out of the piazza, through the galleria, and onto the race course.  It was quite a spectacle and cool to watch.  Our friend Stefano later told us that one of the women on Anghiari’s team was trying to climb a particularly steep hill and decided to get off her bike and walk up.  One of the past winners rode up behind her and told her not to get off, that she could do it.  He then proceeded to push the back of her bike with his hand as he pedaled his own way up.  He was 74 years old.

Sunday was also the big chestnut festival in Caprese 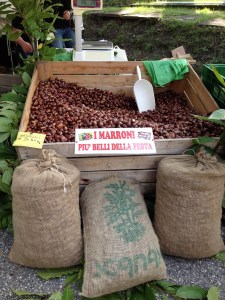 Michelangelo.  That’s a small town near here that’s the birthplace of Michelangelo (not our friend, the artist).  They’re known for their marones, a type of chestnut that is prized here.  There was all manor of chestnut delectables and other great food from the area.  We bought a few things, including some black cherry wine that Julie tasted and liked so much she decided to stuff a bottle in her suitcase to bring back.  While we were there, there was a 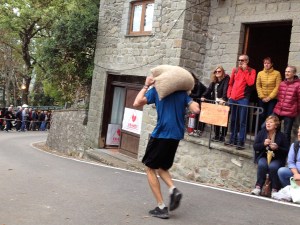 palio.  A palio is a race, the most well-known being a horse race in Siena.  But there can be other palios as well.  This one was on foot around the town walls.  Carrying a ridiculously heavy bag of chestnuts over their shoulders.  Fun to watch, although Tim was quite sure that they will all suffer permanent damage to their musculoskeletal systems  as a result.

Sunday night was our last night with Tim and Julie.  They left Monday morning to finish up their trip in Milan.  We had dinner at Pieve Vecchia near Monterchi, one of our favorite places.  We had a tremendous meal and a great time.  Such wonderful food there.  If you’re ever in the neighborhood, I highly recommend it.

We had such a lovely time with Tim and Julie.  We love Italy.  They love Italy.  We love being in Italy with them.  We ate our brains out, visited places we’d never been before, saw some special friends, and looked at some of the most incredible scenery in the world. This country is just amazing in its beauty.  It’s a sliver of a peninsula that erupts from the ocean in mountainous wonder.  The topography can be brutal – to get anywhere you have to cross a mountain, but you’re rewarded for your efforts by vistas that take your breath away. We just can’t seem to get enough of just looking at it.  And the food is just so fresh and wonderful.  I know I talk about food a lot.  But until you’ve tasted it and see the pride they take in feeding you, you just can’t understand it.  Cooking and eating are more than necessities for them.  They’re touchstones to their past and a way to connect them to their land.  And what a land it is. 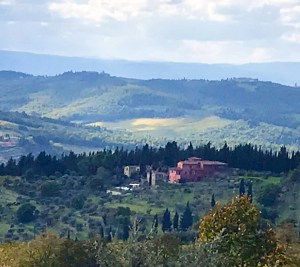 Safe travels, Tim and Julie.  Thanks for the visit and let’s start planning our next trip soon!

4 thoughts on “An Italian Festival Weekend”