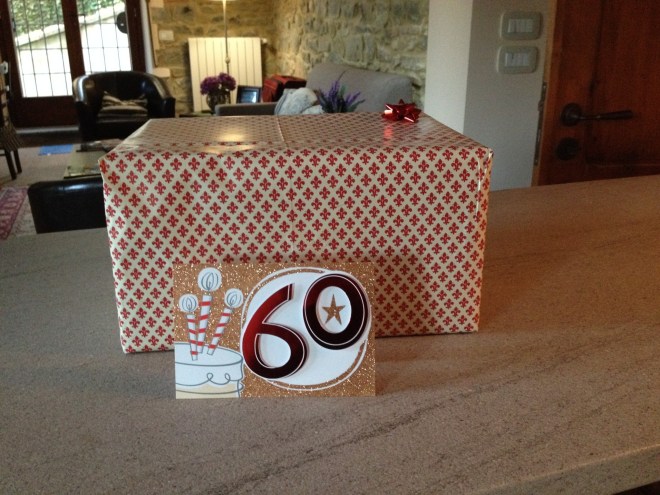 Today is my 60th birthday.  60. Years. Old.  I’m a little stunned by it.  I’m not depressed about it because I don’t feel any different, but I’ve just crossed a threshold that in my mind is significant.  Every so often I’ll just have this flash in my brain – you’re 60!  And so I am.  60.

I woke up this morning to a valley that had turned into a lake of fog. 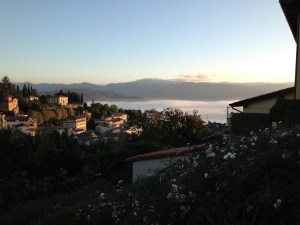 Perfectly clear and sunny, but fog completely covered the valley.  I took it as a good omen.  I’m not sure why, but I did.  Rebirth or cleansing, or something like that.  Anyway, it made me smile and that’s a good way to start your 60th birthday.

With all of Italy at my disposal, I decided I wanted to spend my birthday touring through the Chianti wine country.  In my fantasy, Steve, Millie and I would be laughing and singing as we drove through the winding roads of the Chianti hills with the vineyards spread below us in neat little rows.  We’d be in a convertible and I’d have a scarf tied around my long hair so it wouldn’t blow in my face.  In reality, the three of us were in our rented Ypisilon (not a convertible) with Millie quietly (and often not so quietly) whining in the back seat.  I had no scarf or long hair and we weren’t singing or laughing as we drove.  I was glued to the phone trying to make sure we didn’t miss a turn (we did).

First on my itinerary was a winery that promised to be open on Sunday – and it may have been if we’d been able to find it.  Instead, we pulled into another one that had a sign out on the road that they indeed had tastings.  We parked and Steve went to check it out while I walked Millie around.  He came back and said that the tasting room was closed but there were people out in the yard behind.  With a dog.  We decided to keep moving on down the road, but I wanted to let Millie relieve herself first.  Suddenly I heard something coming up fast behind me and it was a big dog coming after Millie.  I started screaming, Steve picked Millie up and the dog was jumping up on Steve and Millie.  I was kicking the dog, picked up some rocks and threw at him, but he still kept jumping up on Steve.  We finally made our way to the car and managed to get the door open and threw Millie in.  About that time, a couple came running from the back yard calling the dog – who, by the way, completely ignored them.  The man said it was a good dog and we shouldn’t be afraid.  He then asked if we wanted to come in and have a tasting.  We said no, we’d rather not, and got in the car to leave.  The dog followed up us down the road and all the way to the highway.  Even though he terrorized us, I didn’t want him to get out on the highway.  What to do?  We pulled over and the couple came speeding up behind us in their car and got out and got the dog.  OK – well, that was good.  Our day had gotten off to an interesting start.

After the dog incident, we were all a little rattled.  Well, mostly me and Millie.  No one was physically hurt.  Steve said the dog wasn’t biting, just kind of nudging with his snout.  We decided to go to the restaurant I had picked out for lunch and try and forget our inauspicious start.  We went right to the restaurant with absolutely no problems.  It took an hour, but we got there.  Chianti is an incredibly beautiful area, but it’s hilly – that’s one of the reasons it produces such wonderful wines.  What you think will take only a few minutes takes an hour.  You go over a mountain and back down the other side to go 5 miles.  But it’s a wonderful drive through forests and then sweeping views of the vineyards.  With no guard rails.  One time I looked out the window and saw straight down the side of the mountain with nothing between me and it but a tree or two.  But Steve did a great job navigating through it.  Maybe it’s because it was my birthday, but I only had to ask him to slow down a couple of times.  Thank you, Steve.

Our destination was Gaiole in Chianti simply because we’ve never been there before.  I found a restaurant through my Slow Food app and have never been disappointed in any place I’ve ever found there.  The restaurant was Carlino d’Oro and it was set just under the Brolio Castle (more on that later).  We got there about 1:30 and it was doing a brisk Sunday lunch business.  Mostly locals – they pretty much all knew each other – and a few tourists.  Just as we snagged the last table for two, a big tour group of Americans came in.  There’s nothing to spoil the ambience of a small trattoria in Italy than a big group of Americans.  Fortunately, they were in another room from us and we only heard noise, not their conversation.  I know this sounds incredibly hypocritical of me – after all, we’re Americans.  I have nothing against them or the fact that they’re there.  I just like being the only Americans in the place.  It makes it feel more authentic.  We had a great meal overlooking the vineyards.  I had ribollitra, sausage, and a salad.  I can’t tell you how good the sausage is here.  It’s unlike anything we have in the US and I would eat it everyday if I could.  We shared an appetizer of crostini and Steve had raviloi with butter and sage.  It was wonderful and a great birthday meal.  Oh, and a fabulous Chianti Classico.  Perfection!

After lunch, I had planned to visit a winery.  Steve had a list of wineries from all his wine research and I picked one that was close to the restaurant.  I checked the website because many wineries are closed on Sunday and this one was open.  Except it wasn’t.  Closed up tighter than a tick.  As we were driving back, we passed by a tasting room for Brolio, so we went in.  The guy told us we could go up and tour the castle and then come back down and have a tasting including in the price of the tour ticket.  OK – up we went to the castle and what an experience that was.

The Brolio castle is owned by the Ricasoli family and was 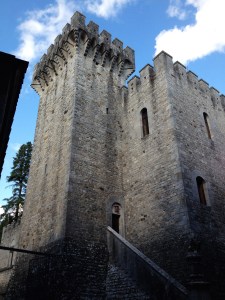 originally built in 1000 AD.  Here you have to always specify AD or BC because it could be either.  It suffered several hardships over the centuries – conquered by Florence, defeated by Siena, occupied by Napoleon, later the center of a skirmish in WWII – but still somehow the Ricasoli family always came 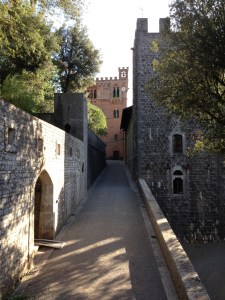 back to it and nurtured it back to health.  In fact, they still occupy it today.  And, Bettino Ricasoli, in addition to being the second Prime Minister of Italy in 1861, was the father of viticulture in this area.  He pioneered wine making in this area and is largely credited with starting the Chianti tradition.  Thank you, Bettino.  You’ve made the world a better place.

This castle is well worth visiting.  Since it’s so old, it’s been added 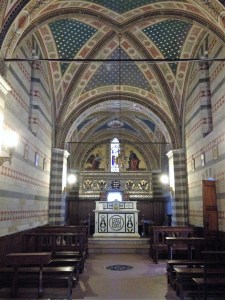 to, changed, modified and adapted over the years so today it is a mishmash of styles and takes on a rambling quality.  But its perch on a hilltop gave it a strategic significance and incredible views.  There is still the family chapel, which is beautiful inside and it where Bettino himself is buried.

There was a big bike race going on that we’d seen signs for and stray bikers here and there.  Apparently, about the time we went 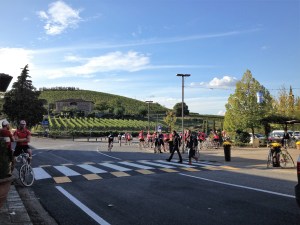 back down for the wine tasting, the race was in its final stages and most of the teams were coming around the castle and down the hill toward the little town of Gaiole in Chianti.  Ricasoli wines was a big sponsor and they had all this race stuff for sale in the tasting room.  Since the date was my 60th birthday, I was interested in getting a little something as a memento.  Then I noticed on the poster that the first race was in 1997.  Well, that happens to be the first year we ever came to Italy and we were here on my birthday that year as well.  So the first race was on my birthday weekend when we made our first trip to Italy and the most recent was on my 60th and we just happened to drop into it.  I took that as another good omen and bought a very overpriced poster. Then as we settled into the bar for our wine tasting, I found 10 euro on the floor. No one around who could have dropped it so I put it in my pocket.  The wine was so good we paid extra for another taste or two and walked out with a bottle and 10 euro.  Sweet.

On the way back to Anghiari, we were right in the thick of the bike race.  The start and finish line was in Gaiole in Chianti and it was indeed finishing up.  Driving along these roads is interesting enough without throngs of bikes, the roads lined with cars and spectators and police rerouting traffic through the town.  It was quite a spectacle.  We would have stopped and gotten into the celebration but there was nowhere to park.  Everyone for miles around had apparently come out for this race that marked my 60th birthday.

After we got home, Anna and Livio texted to say they were going down to the pizzeria for dinner and asked us to join them.  We were too tired, too full, and too comfortable to do it, but there was a part of me that would have loved to cap my birthday with an impromptu dinner with friends on the piazza.  Instead, we nestled in our little apartment, content after our adventurous day in Chianti.

Birthdays are symbols for us of the passage of time.  They are a way to mark our progress through life and, hopefully, our increased knowledge of how to navigate its pitfalls.   I don’t know why this birthday was significant for me.  I was not exactly dreading it, I was just very aware of it.  Now that dawn has come on my first day as a newly minted 60 year old, I take it for what it is.  Another opportunity to enjoy the bounty of this earth.  Another chance to appreciate those people in my life who have helped (or tried) to make me a better person.  Another day to live.  And for that I am grateful. 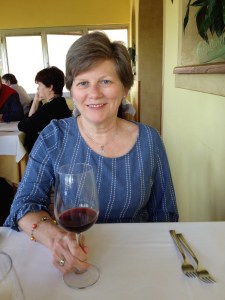 4 thoughts on “A Dog Attack, a Bicycle Race, and a Threshold Crossed”