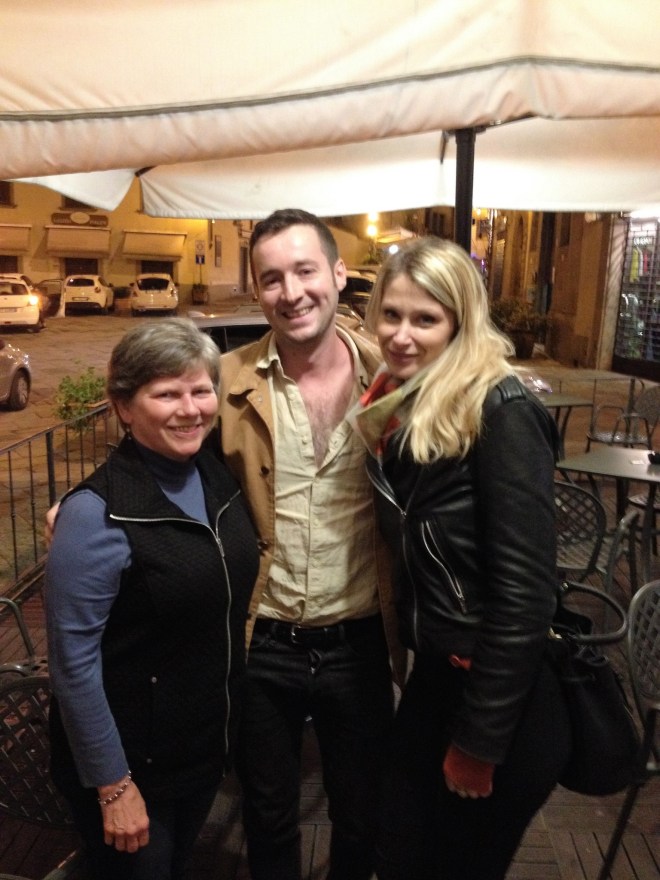 Our perfect weather streak came to an end today.  This morning was cloudy and foggy, then light rain in the late morning/early afternoon.  Then it got chilly.  The rain was followed by a little cold front that I hope doesn’t last long.  The cool temps are nice, but I like being outside on the terrace and right now it’s a little too chilly for that.

Our friends Francesco and Olivia came to visit today from Montepulciano.  They had never been to Anghiari and drove over for lunch.  They arrived and shortly thereafter the rain arrived.  We showed them around town, umbrellas in tow, and hit all the hot spots.  We started at the top of town with the Etruscan ruins underneath the City Hall and ended with the Busatti shop at the bottom of town.  While the Etruscan ruins are fascinating to us, to them it’s pretty ho-hum stuff.  They were much more interested in the frescoes in the churches and the architecture of the buildings than the Etruscan wine-making facility under the City Hall.  They live with this stuff everyday and while they certainly appreciate it, they were impressed with the charm of the village itself and the fact that it’s not touristy.  The shops and restaurants are authentic, Italian places.

They have lost that in Montepulicano.  When we visit Montepulicano, we see a beautiful Tuscan hill town.  They lament the closing of traditional shops, like the macelleria (butcher), in favor of shops that cater to tourists, like United Colors of Benetton.  Also, what goes along with these changes – renovating and retrofitting buildings so that they lose their historic character.  Most of the hill towns in this area have Etruscan ruins around them.  Most of them have fantastic, sweeping views.  And, unfortunately, most of them are dying.  Even our beloved Anghiari is seeing some decline in the shops.  Every time we visit, there’s one more shop closed.  This time it was the florist on the piazza.  She moved down the hill to the suburbs.  So many of them are doing that.  Just like in the US.

Young families don’t want to live in the villages – parking is a problem, the old apartments require a lot of work, they’re dark, lots of stairs – so they buy a new house with a yard and private parking down the hill.  The only difference in their suburbs and ours is that theirs are five minutes away – ours are 30, plus horrendous traffic.  I don’t know about all these villages, but Anghiari offers so much within its old city walls.  Two very good museums, a new museum devoted exclusively to the woodcock (the sign proudly claims it’s the first of its kind), a theater with many live performances, a week-long classical music festival in summer, every Wednesday night in August has live music performances all over the village, a very well-respected book festival every summer, and many more things that offer culture and arts.  There are also wonderful restaurants – we counted 13 the other day.  Still, village life is slowly melting away as a new generation wants something different.  It makes me wonder what will happen to these old villages over the next five to ten years.  Just in the time we’ve been coming here, we’ve seen a sharp decline in the number of shops.  When we lived here four years ago, there were two small supermarkets (both closed now), two fruit and vegetable stores (only one now), two butchers (only one now).  Not many young people want to be butchers or run a fruit stand.  As this generation moves on, will the charm of the traditional Italian village vanish along with them?

We had lunch at Talozzi, a great little family run place.  They loved the authenticity of it and had a nice, long conversation with the mother, who is also the cook.  They talked about this issue of the villages losing their character and becoming tourist attractions.  I felt a little conspicuous in this conversation, since I am what they lament.  As I listened to what I could understand from three Italians talking very fast and all at the same time, I thought it’s a good thing that they have tourists because otherwise these villages would have shuttered long ago.  I think the difference is how the tourist approaches things.  If you demand your own values and standards, then you’re part of the problem. If you respect the ways of the culture and appreciate the differences and subtleties, then you’re part of the solution.  This may be the ultimate in rationalization, but it works for me.  I will do everything I can to keep these locals shops vibrant while I’m here.  I’ll respect the fact that they’re never open when I want them to be and never complain about them not having air conditioning.  I’ll adapt to their ways.

I’m ashamed to say that I didn’t take one picture of Francesco and Olivia.  As they were driving off and we were all waving wildly, I thought about it, but then, of course, it was too late.  We had a very nice time with them and were so happy to be able to show them Anghiari.  They really liked it and kept saying they understood why we come here.  Italians really don’t stray far from their homes.  With all there is to see and do in this country, it always amazes us that we’ve explored it more than most Italians.  An Italian can tell you everything about the area they are from, but they really have no desire to see what’s over the next hill.

Later in the afternoon, we met Stefano and Ludivica for an aperitif at the bar in the piazza.  We sat outside in the chilly evening air and had a wonderful time talking about their lives, work, and local gossip.  They gave me an early birthday present – a beautiful silver necklace with a small “C” medallion.   These are very popular in Italy right now, so they thought I would like it.  It was such a thoughtful gesture and made a special day even more wonderful.  And now I’m a trendy Italian girl. 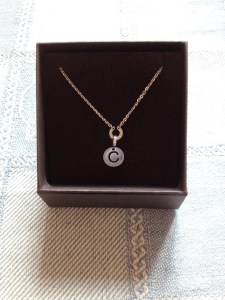 8 thoughts on “A Day with Friends”