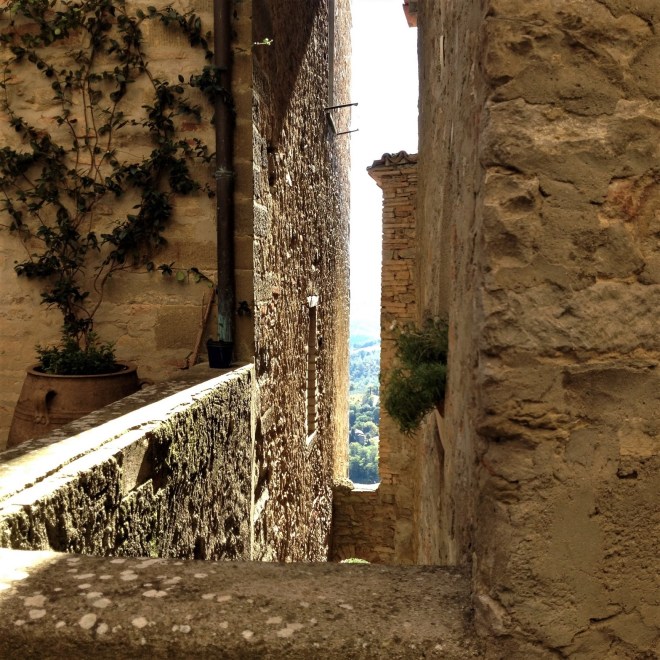 When we got off the plane in Rome and were making our way through the ridiculously long customs line, we met a woman who broke in line in front of us.  We were a little grumpy from the long flight and the long line that stretched ahead of us.  So when this woman wandered in front of us, we were probably a little rude.  We probably said something like, “you can’t just cut in line” or something equally snotty.  Well, it turned out that she was American and was afraid of missing her connection to Sicily.  We told her there was a separate line for people with an hour or less connection and she tried that but they wouldn’t let her in it.  Her flight was in about an hour and ten minutes so she didn’t qualify.  So we let her back in line with us.  As we waited in the long line, we struck up a conversation and found out that she was going to Sicily to lead a tour group and then she was going to a small town about an hour and a half southeast of Florence.  That’s Anghiari territory, so I asked what town.  Sanselpolcro, she said.  I said we were going to Anghiari and she said oh, of course, Anghiari – I know it well.  They’re neighboring towns.  She’s a retired professor with Meredith College in Raleigh, NC and they have a study abroad program in Sansepolcro.  So she teaches there and has been going there for several years.  And our old Italian teacher, Antonio, teaches Italian there to the American students.  I asked her if she knew him and of course she did.  We had a great time talking about the area, the people, how wonderful it is and on and on.  So we exchanged numbers and email addresses.  She was not scheduled to come to Sansepolcro until the day we leave, so we wouldn’t see her.  But she put us in touch with the professor who was in charge this semester and said she would arrange for us to have to have lunch there.  Today was the day we went there for lunch.

What a great experience.  We went to the palazzo they use right in the heart of Sansepolcro and had a wonderful meal with eight of the most delightful sophomore college girls. And their professor and her husband.  Why didn’t I take a picture?  We had a great conversation with all of them and learned about their impressions of Italy and what they were planning to do while here.  It was one of those times that you feel a renewed sense of optimism in the future of mankind.  Great, wonderful people who you trust with leading the world.

Before we left for Sansepolcro, we took our morning walk.  Today is market day in Anghiari, so we toured through that and bought a couple of extra suitcases for all the stuff we’ve accumulated to bring back.  Then out to the country.  What a great way to start the day.  Beautiful and tranquil.  We did pass a farmhouse that had an interesting “thing” hanging on the front porch.  Early Halloween decoration?

After lunch we drove up to Monte Santa Maria in Tiberina, a very high hill town near here.  Anghiari is about 1,400 feet and Monte Santa Maria is about 2,250.  You drive up a tiny little winding road that is filled with potholes and bumps and lumps.  You go up a mountain, down a mountain, then up a mountain and you’re there.  It is an incredibly precious little town and I can’t imagine who actually lives there.  It’s so very remote and there’s really nothing there except one restaurant and a couple of castles.  But there’s a beautiful view from up there.  Just incredible.

A little shopping, a little resting, a little reading then we went to happy hour at the sports bar down below us.  We had our first Negroni of this trip – good, but one’s enough for me.  Met several friends and got invited to dinner with Giovanni, Paola, Livio, Anna and Francesca.  The same people we had lunch with yesterday, except for Dr. Plini.   It was a special night out for Paola and Giovanni – usually Dr. Plini insists on having Paola at home.  Apparently, he stays up late and knows when Paola is not home.

Encounters, chance or otherwise, are what make travel so special.  We run into people all the time who make our lives richer and our world bigger.  And the more we get to know a place, like Anghiari, the more we treasure these moments.

3 thoughts on “A Chance Encounter”