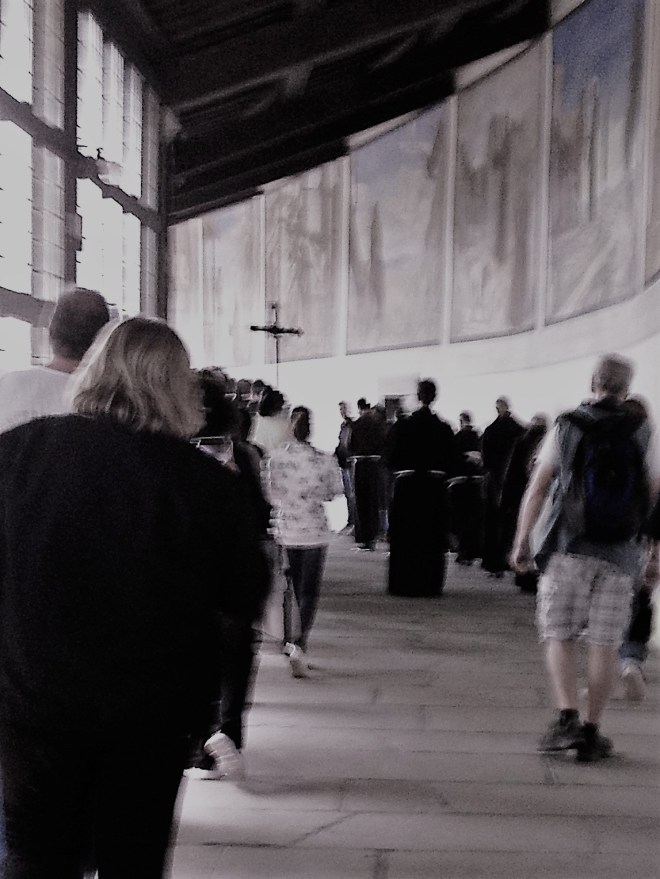 Our first morning in Italy was bright and clear.  We all slept late and felt rejuvenated after our long trip.  It was such a beautiful day that we decided to go up to Chiusi della Verna to visit the monastery founded by St. Francis in the 1200’s.

The drive to Chiusi della Verna is up a mountain and is winding and steep.  On the way up, we passed through Caprese Michelangelo – the birthplace and childhood home of Michelangelo.  Imagine.

We stopped for lunch just before we got to the monastery. 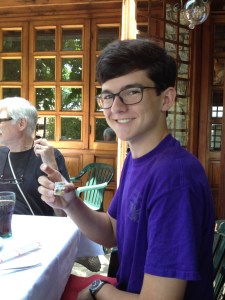 Hunter is tasting his way through Italy and is trying almost everything.   Some things he likes, others not so much.  At this lunch, he found out he really likes truffles.  And all manner of cured meat.  This is good since you can always get a great antipasto plate at most places.  It also proves he has excellent taste! 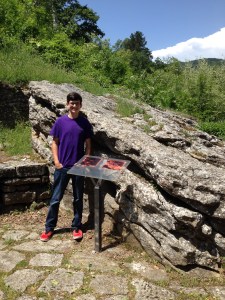 the inspiration for Michelangelo’s Creation of Man in the Sistine Chapel.  He thought that this particular formation would be the perfect base for a human form to drape across.  Apparently he was right.

Chiusi della Verna is a magical place to me.  The legend is that Count Orlando somebody met St. Francis and was so taken with him and his message that he gave him this mountain for a spiritual retreat.  To this day it is still a Franciscan monastery.  St. Francis didn’t seem to stay in one place very long and wandered around the Tuscan and Umbrian countryside quite a bit.  However, he was at della Verna for quite some time and it was there that he received the stigmata.  One of my favorite stories is after St. Francis’ death, the brothers in the monastery made a processional to the chapel built where he received the stigmata.  One day there was a horrible snowstorm and they were unable to make the visit.  The next morning there were tracks in the snow where all the animals had made the trek without the monks.  It was then that the monks built a covered passageway so that they would never miss another processional.  Every day at 3:00 pm they have a brief service in the basiiica and then make the processional to the Chapel of the Stigmata.  Guess when we were there?  That’s right – 3:00.  We went into the basilica and listened to the monks chant and sing for about 15 minutes and then followed them down the covered walkway into the Chapel where they had another brief service.  It was beautiful and I’m so glad we got to be part of this.

St. Francis was a naturalist and a great lover of animals and the 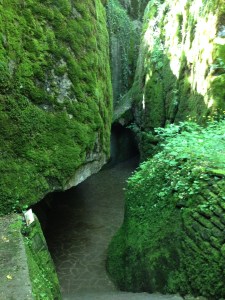 outdoors.  This place really exemplifies that – the landscape is very dramatic, but also very peaceful and contemplative.  I can see why he felt so close to God there.

Hunter loved exploring the sanctuary and examining the 11th century walnut pews.  He loved walking with the processional and seeing the places where St. Francis slept and liked to go to be alone.  It was a good first day.

After we got back and regrouped, we took a walk around town.  Coincidentally, we happened to walk by the best gelato place in town first.  Hunter had his first real Italian gelato while we strolled through town.  We ended up in the piazza and sat outside while having happy hour.  We talked about the day and what we liked and didn’t like, talked about plans for future days, and talked about life in Anghiari.  We introduced to Hunter to some of our old friends from when we lived here and they all had the same initial comment – “Grande!”  I told Hunter everyone would think he was tall and they all do.  Hunter also had his first beer with us, although he wasn’t real taken with it.  Steve finished it.  We’ll try again and maybe he’ll find something he likes.

We had dinner at Cantina Gran Duca, the restaurant just below our old apartment.  More antipasto, but for dinner we all had meat.  Sometimes you just have to have meat.  We had a nice visit with Cristina, the owner, and her son Mattia.  They caught us up on all the neighborhood happenings.

Back to the apartment where the old folks went to bed and the young one did some serious texting, I’m sure.  First full day in Italy – beautiful weather, beautiful scenery, a beautiful memory.

8 thoughts on “A Bright New Day”